Matteo Berrettini was the serving king all week in Stuttgart. And that did not change in the final.

The World No. 30 saved five set points in a second-set tie-break before defeating Felix Auger-Aliassime 6-4, 7-6(11) on Sunday to win the MercedesCup for his third ATP Tour title, ending the #NextGenATP Canadian star’s hopes of claiming his first tour-level trophy.

“On grass, the first tournament of the year [on this surface] beating these unbelievable guys… there were a lot of tough moments,” said Berrettini, who did not lose a set during his run, ousting second seed Karen Khachanov in the second round. “I never lost my serve, but all the matches were so close and I’m really happy for what I did on the court because it was mentally really difficult to stay there and I’m really proud of myself.”

Both players served impeccably in the pressure-filled tie-break, with just three of the 24 points going against serve. But Berrettini converted on his third championship point after one hour and 47 minutes, aggressively hitting an inside-out forehand return off a second serve, which Auger-Aliassime replied to with a slice into the net.

Berrettini won all 50 of his service games this week, and captured more than 89 per cent of his first-serve points in the tournament, including 41 of 44 with the title on the line. The Italian, who also didn't lose serve en route to his maiden title last year in Gstaad, did not face break point against Auger-Aliassime. Last year two additional players went unbroken en route to titles: Novak Djokovic in Shanghai and Alexander Zverev in Madrid.

"You’re feeling good during the week, but you never know. I played great guys. This match was unbelievable. We had chances, a lot of set points for him, match points for me, so it was a really tough one," Berrettini said. "I’m really happy the way I fought during the week."

Get To Know Berrettini:

Fabio Fognini has recently received a lot of attention for capturing his maiden ATP Masters 1000 title at the Rolex Monte-Carlo Masters and becoming just the third man from his country to crack the Top 10 of the ATP Rankings, which he accomplished this week. But the 23-year-old Berrettini is not far behind, projected to climb to a career-high No. 22 on Monday.

Berrettini, the first Italian grass-court titlist since Andreas Seppi at 2011 Eastbourne, has won all three of his ATP Tour crowns in the past 11 months. When he triumphed in Gstaad last July for his maiden moment, he was just World No. 84. Berrettini was also victorious on the clay of Budapest in April.

"There were a lot of Italians [cheering for me] since day one, from the first practice, and they were asking for pictures," Berrettini said. "I’m really happy because we are travelling a lot during the year and it’s always nice to meet some Italians and speak Italian also."

The champion was successful in keeping Auger-Aliassime from gaining too much rhythm in the match. Between his strong serving and aggressive play, the 18-year-old was unable to dictate many rallies. Berrettini also used his dagger-like backhand slice a majority of the time off that wing to keep Auger-Aliassime off balance.

"It’s been an amazing week whatever the outcome [was] today. I think I surprised myself every match this week being able to reach another final and my first one on grass, so it’s been amazing," said Auger-Aliassime, who was competing in his first grass-court tournament as a professional. "Obviously Matteo was too good today. I gave it my all, but he played good in the important moments and he deserves it." 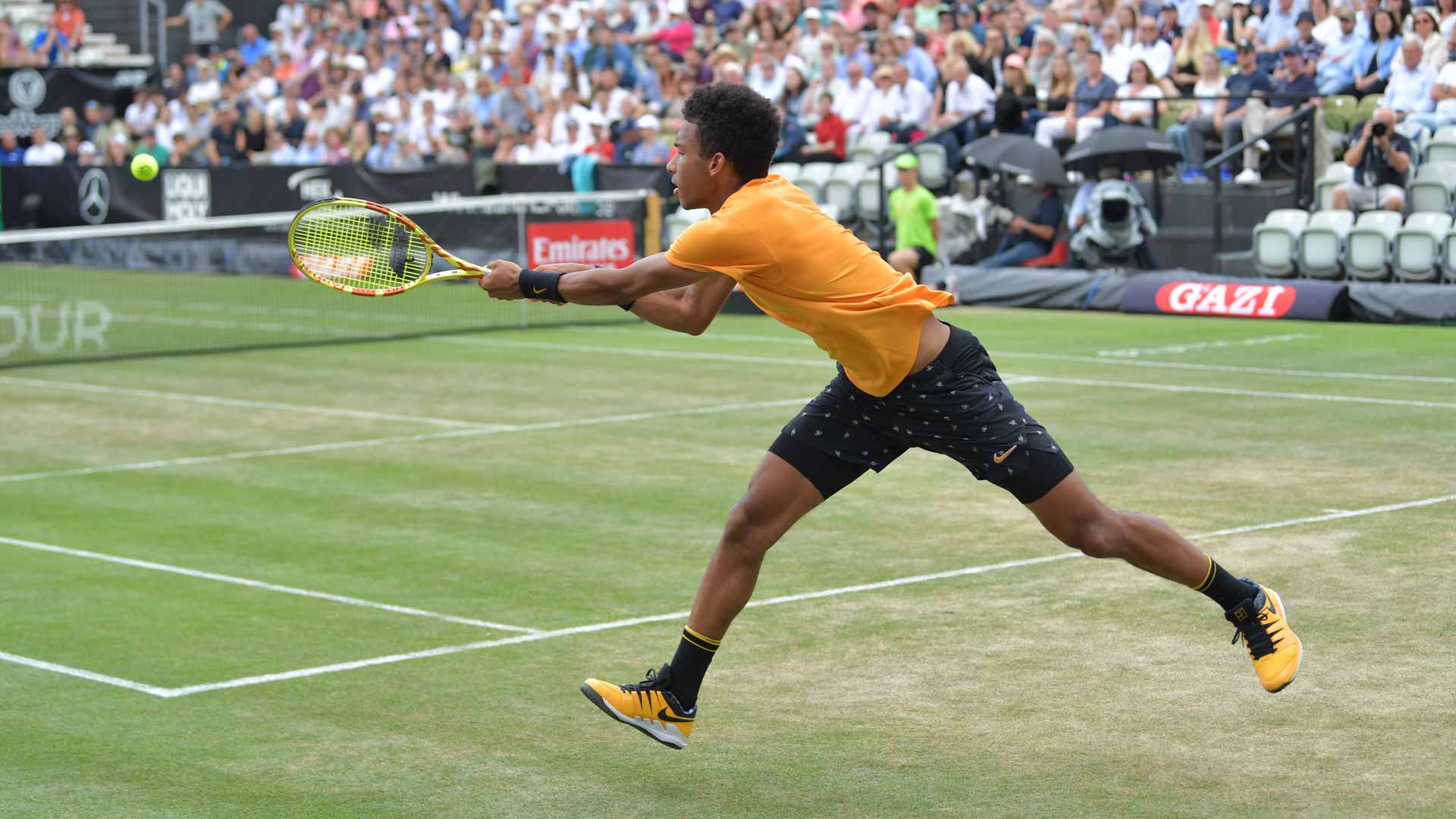 The only edge Berrettini needed in the first set was an early break at 1-1, when Auger-Aliassime made an unforced error by pushing a backhand approach shot into the net. The Italian lost just one point on his first-serve in the opener.

And in the second set, it felt as if it was a battle of strong serving. Auger-Aliassime battled hard to save two break points in the first game of the set and then dig out from a 0/40 hole at 2-3. But he was unable to take advantage of one of his five chances in the ensuing tie-break, with Berrettini serving well under pressure. And when the Italian missed his first serve, he was quick to take control of points with his forehand.

Berrettini leaves Stuttgart with €117,050 in prize money and 250 ATP Ranking points, as well as plenty of momentum. The Italian will face sixth seed Nikoloz Basilashvili in the first round of the NOVENTI OPEN in Halle.

Did You Know?
Berrettini this week became the first player to reach the semi-finals on three different surfaces this season. He had never previously reached a tour-level grass-court semi-final.