Marcos Baghdatis finishes his career with four ATP Tour titles and a career-high ATP Ranking of No. 8.

Perhaps it’s fitting that Marcos Baghdatis’ career came to an end at The Championships. Nearly three decades ago, that is where this fan favourite’s tennis journey began.

The 34-year-old’s first memory of watching tennis came during the 1992 Wimbledon final. Baghdatis remembers Goran Ivanisevic missing a backhand volley into the net on match point, giving Andre Agassi his first and only trophy at the tournament. The Cypriot, who had just turned seven, vividly recalls Agassi crumbling to the court in tears.

On Thursday, almost exactly 27 years later, Baghdatis lost in straight sets against in-form Italian Matteo Berrettini, the No. 17 seed. That was the final match of Baghdatis’ career.

Little did that boy from Cyprus know that between those two moments, not only would he get to become a professional tennis player, but he too would inspire plenty of children from around the world.

To understand Marcos Baghdatis is to understand that it wasn’t just his ballstriking ability — which was exceptional — that endeared him to fans. It was who he was as a person. At the 2005 US Open, then just No. 73 in the ATP Rankings, he asked Agassi, the player he saw on his television more than a decade earlier, if he would play a set with him.

You May Also Like: Marcos Baghdatis Reveals 'The Last Time'

“Typically I don’t play practice sets with other players during a Grand Slam, but Baghdatis asked with disarming grace,” Agassi wrote in Open, his autobiography. “I won the practice set, 6-2, and afterward he was all smiles. I saw that he’s the type who smiles when he’s happy or nervous, and you can’t tell which.

“I told Baghdatis that he played a little like me, and he said it was no accident. He grew up with pictures of me on his bedroom wall, patterned his game after mine.”

In a sense, Baghdatis was just happy to get to enjoy the roller-coaster that is life as a professional tennis player, mingling with the legends of the game and getting to make his job competing and, in some cases, beating them. It’s easy to get caught up in the wins and the losses, the ecstasy of title runs and the stinging pain of disappointing defeats.

But Baghdatis had a skill that doesn’t involve swinging a racquet, and that was his ability to embrace the moment. Intangibles can be talents, too, and Baghdatis always seemed to rise to the occasion when the lights shone brightest as fans got increasingly involved in a match.

The spotlight was plenty bright for him by the age of 20. At the 2006 Australian Open, then ranked No. 54, Baghdatis went on a Cinderella run to the final in Melbourne after defeating three consecutive Top 10 opponents. He took the first set against Roger Federer before ultimately succumbing in four sets. An up-and-comer from Cyprus was suddenly a star. And just five months later, he reached the Wimbledon semi-finals to become the first Cypriot to crack the Top 10 of the ATP Rankings.

Then came that year’s US Open. After winning his first-round match in straight sets, Agassi was waiting in the second round — the same player from his childhood television, and the same man who drubbed him in a practice set just a year earlier. Except this time, Agassi was playing his final tournament, and that could have been the American’s last match.

Nobody will soon forget that classic, which lasted deep into the New York night, eventually won by Agassi 6-4, 6-4, 3-6, 5-7, 7-5. It was not just a battle of skills, but a battle of wills, with Baghdatis leaving it all out on the court, literally, just to get back into the match from two sets down. At 4-4 in the fifth set, after a few hops, Baghdatis crumbled to the court due to cramps. After the match, the rising star and icon ended up on tables next to each other in the training room.

“His team is working on him. They stretch his hamstring, his quad cramps. He tries to lie flat, his groin cramps. He curls into a ball and begs them to leave him be. Everyone clears out of the locker room. It’s just the two of us. I turn back to the TV,” Agassi wrote in his book. “Moments later something makes me turn back to Baghdatis. He’s smiling at me.” 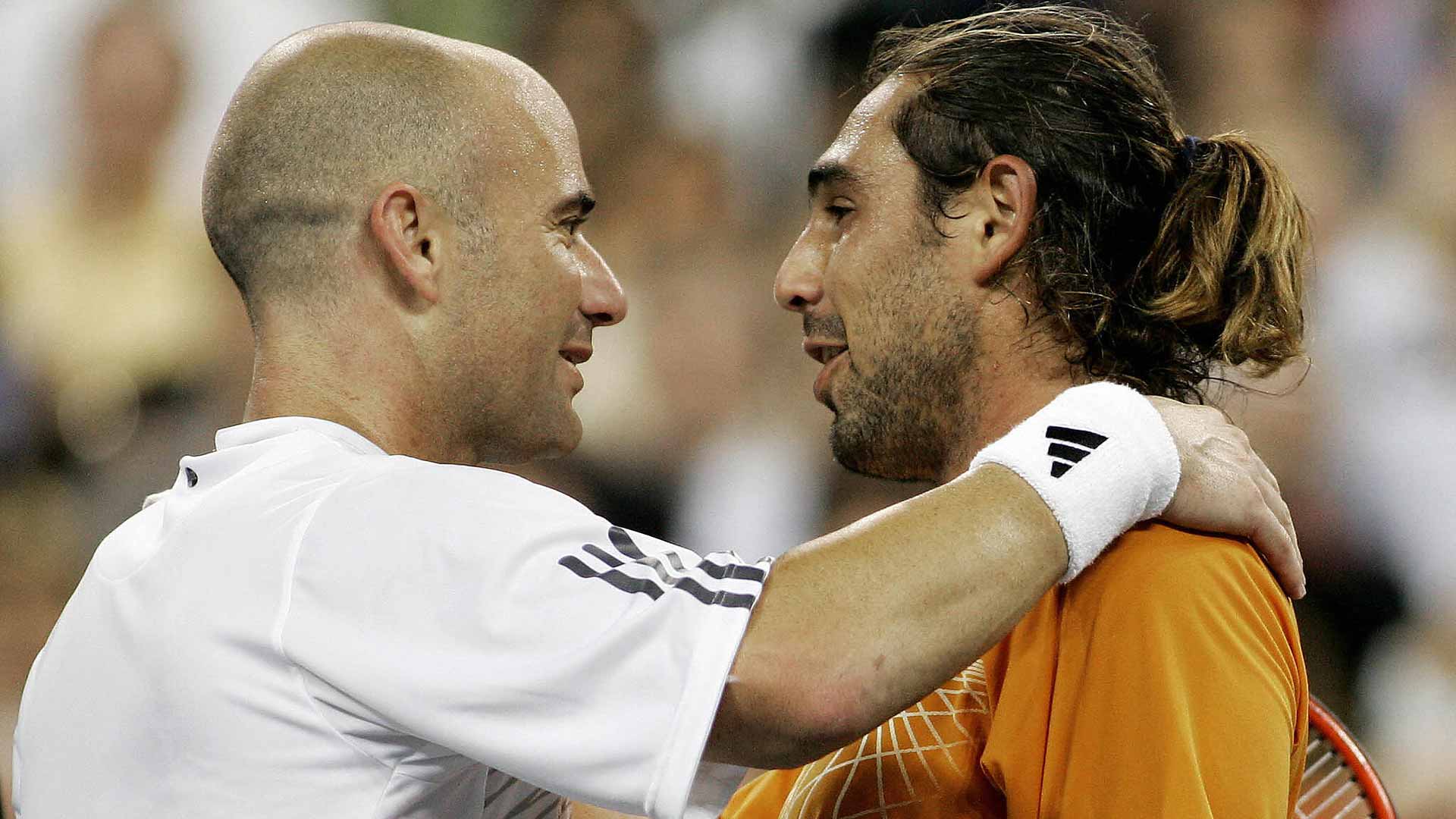 And that infectious smile has stayed with Baghdatis throughout his career, which lasted more than 15 years. And whether he was soaring at his best level or grinding back from injury, the Cypriot never left that part of him behind.

“Whatever I do, I like having fun. If I don’t have fun, I would not do it. For me, life is fun. It’s enjoyable, and that’s the person I am,” Baghdatis told ATPTour.com. “That’s the career I had. Okay, there were tough moments for sure, difficult moments. But I always looked at it in a positive way and I tried to learn from every down [moment] I had.”

Although he’s well-known for it, Baghdatis was more than just a smile. At his best, he was as talented a baseliner as you could find, with an innate ability to slap his forehand exactly where he wanted, and take his backhand up the line at the perfect moment. That allowed him to go blow-for-blow with some of the game’s greats, earning 22 Top 10 wins, and 348 tour-level victories overall. He tallied wins against Federer, Rafael Nadal and Andy Murray, after all.

“[One of the best parts was] competing, playing against the biggest names in the history of tennis. The Top 4, being able to compete against them and being able sometimes to win against them, it’s just amazing,” Baghdatis said. “Playing the final of a Grand Slam, semi-finals here, having all these emotions, all these memories and also wherever I went I had so much love from the people, from the fans. Everything was just such an amazing ride for me. I cannot describe how I felt, but it’s just all the love from the fans and the emotions, energy they gave me. It was just amazing for me and that is what I’ll remember forever.”

Baghdatis won four ATP Tour titles and reached 10 additional finals, most recently at 2017 Chengdu. And even as he struggled with injuries at various points during his career, he never gave up, consistently ending ‘down’ stretches with extended periods spent well inside the Top 100. But last year Baghdatis began to think that it may be time to bring his journey to a close.

“I was trying to get back to where I think my level should be and it’s been very difficult. My body is not letting that happen,” Baghdatis said. “My wife is pregnant with our third child on the way and I just think it’s about time for me to let go and stop punishing myself. For me there are so many other things in life than tennis. I have a wife, I have two unbelievable daughters, and it’s time for me to maybe spend more time with them.

“My body’s aching. I have a lot of problems: hips, ankles, foot. I’m struggling. Last year I was thinking about it all the time and I told myself I’d give it a last shot. This year already I already had three injuries and it’s been tough, it’s been tough. Knowing that Karolina is pregnant, it made my decision so much easier also. We’re all happy with that decision and we’re looking forward for the future.”

Baghdatis has also impacted plenty of players in the locker room with his energy and skills, most recently reigning Next Gen ATP Finals champion Stefanos Tsitsipas. Although Baghdatis is 14 years older, they have formed a bond that the Greek says will last beyond his friend’s retirement.

“Marcos is one of the most gifted, most positive people you'll ever meet. He shows it on the court. He has this vibe where it kind of feels like life is more important than tennis, which I love to see,” Tsitsipas said. “Some people are too serious, like me when I play. He has this gift, this smile, this energy. I mean, the fans love it.”

Delighted to have the smiling Cypriot @marcosbaghdatis next to me.

I love this guy! pic.twitter.com/FlDvRM9aR1

Tsitsipas also grew up admiring Baghdatis’ skills on the court, wishing he could borrow the Cypriot’s service return once he hangs up his racquet.

“I believe he's underrated. He deserved more. But things worked this way. The fact that he did semi-finals at Wimbledon, finals in Australian Open, it was a big thing not just for him, but also for his country,” Tsitsipas said. “He came from a really small country, with zero history in tennis, with zero tradition in that sport.”

It’s been a wild ride for Baghdatis. And even though his playing career came to an end on Thursday, fans will not soon forget the Cypriot star.

“I think I am remembered as the smiley guy on court and I’m good with that. I think all the messages I get from fans, from people around, from other players too, is the person I was,” Baghdatis said. “I think for anybody in this world, it’s very important to get the respect that you always had for people. To get it back in the end, I think it’s the best gift ever.”