Tennys Sandgren picks up his fourth Top 10 win against Matteo Berrettini at the Australian Open.

Tennys Sandgren continued his love affair with the Australian Open on Wednesday. Two of his previous three Top 10 wins came during his inspired quarter-final run at this event two years ago, and the American picked up a fourth by stunning eighth-seeded Italian Matteo Berrettini 7-6(7), 6-4, 4-6, 2-6, 7-5 in their second-round clash.

Sandgren won fewer points on the day (148 to 152), but prevailed in the rallies that mattered most to advance in three hours and 23 minutes.

“It’s a Top 10 win at a Slam, so it’s up there for sure," said Sandgren, who finds himself at No. 100 in the FedEx ATP Rankings after playing just one tour-level match between the end of last year’s US Open and the end of the season. Last week, he failed to defend the 250 points he collected 12 months ago by winning the Auckland title (d. Norrie).

But after his third consecutive run to a major third round, the Tennessee native proved that he has emerged as a big-match player.

“I was injured for most of the Fall. I tore a ligament and got a stress fracture in my toe. After the US Open I played one week in Asia and then I was done. I had five to six weeks where I didn’t have any points to defend [and could have pushed higher in the rankings] but I couldn’t play.

“I felt I played well in spurts last year. I had some good weeks at Slams. I like these tournaments a lot… Sometimes you can get lost a little bit when you’re playing 30 or 35 weeks a year. I feel my game comes together in these weeks.

“You gear your schedule to peak in these weeks. I’m getting get better at that as I get older. Maybe I’m just getting older and wiser. I take my weeks off so I can prep for these weeks.”

Both players traded service holds throughout the opening set. They each let slip a mini-break lead in the tie-break, but it was Sandgren who first saved a set point at 5/6 with a strong forehand approach. The American earned a set point at 7/6, but Berrettini erased it with a big forehand of his own. That wing would betray the Italian as he sprayed a wild error at 7/7 and Sandgren took the opportunity for an early lead.

The Italian began to grow frustrated at the windy conditions and how they impacted the timing on his forehand. Sandgren smartly stood well behind the baseline and opted for conservative, high-percentage tennis, letting his opponent self-destruct in the second set. He grabbed the lone break at 2-2 and went on earn a commanding two-sets advantage.

But just when it seemed that the American was about to complete a stunning upset, Berrettini stepped up in the last game of the third set. He added extra height to his shots and extended the baseline rallies, sparking a forehand error from Sandgren at 5-4 to break the American and insert himself into the match.

Sandgren surprisingly strayed from the tactics that had given him the lead, attempting to match Berrettini’s aggressive baseline hitting in the fourth set. The eighth seed handily prevailed in the power battle, finding the range on his forehand and breaking Sandgren twice to send the match into a decider.

It appeared that Berrettini would complete a remarkable comeback when he earned triple break point with Sandgren serving at 3-4, but the American bravely clawed back to hold serve. He stayed with Berrettini and then pounced at 5-5, showing outstanding court coverage to secure a break when the eighth seed sent a forehand into the net. The 28-year-old flexed his bicep after a strong first serve wrapped up one of the biggest wins in his career.

You May Also Like: Djokovic Channels Ivanisevic In Serving Clinic

Sandgren will next take on Sam Querrey. After a mixed bag of results last season that didn’t meet his lofty standards, the American looks poised to push back up the FedEx ATP Rankings this year. He advanced to the third round by defeating Lithuanian Ricardas Berankis 7-6(2), 4-6, 6-4, 6-4.

Although Querrey enjoyed an outstanding grass-court season last year that included a quarter-final showing at Wimbledon and runner-up finish in Eastbourne (l. to Fritz), he posted a combined 16-15 record on other surfaces. If he can bring his Melbourne form to the rest of this season, he’ll quickly improve on his current ranking of No. 45. 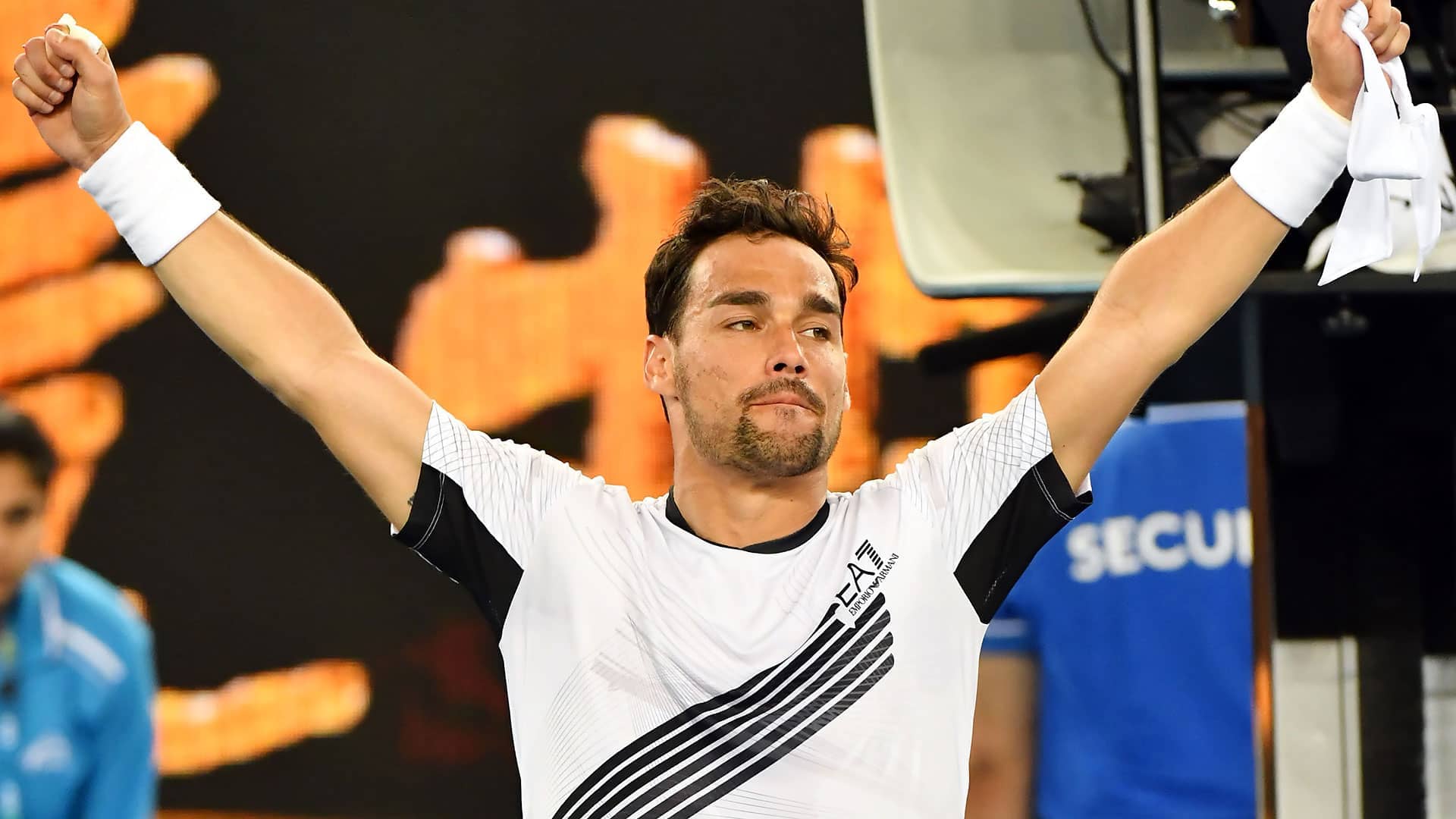 Fabio Fognini continued to work overtime at the Australian Open. Two days on from a deciding set tie-break win over American Reilly Opelka on 1573 Arena, the Italian was at it again on Margaret Court Arena, this time against Australian Jordan Thompson in a 7-6(4), 6-1, 3-6, 4-6, 7-6(4) win over four hours and six minutes.

Thompson led 4-2 in the first set and at 5-4 could not convert two set points on Fognini’s serve. Fognini wrapped up the 58-minute opener, with 21 unforced errors costing Thompson, and the Italian went on to strike 14 winners and secure the first five games of the second set. Thompson, clearly frustrated, rallied and took a 3-0 lead in the third set and one service break proved to be enough for the fourth set. He saved two match points at both 4-5 and 5-6 in the deciding set, before Fognini’s experience counted in the tie-break.