A LOOK BACK
Shenzhen Longhua Open (Shenzhen, China): This week, the ATP Challenger Tour descended on the affluent Mission Hills Country Club. Home to 20 hard courts, as well as the largest golf facility in the world, with 12 courses, the venue is a sprawling sports complex.

It is only fitting that the prestigious club would host a historic moment for tennis in China. On Sunday, Zhang Zhizhen claimed the first all-Chinese final in Challenger history, defeating countryman Li Zhe 6-3, 4-6, 6-1 in front of a packed crowd at Mission Hills.

It has been quite the impressive four-year stretch for Chinese tennis, with Wu Di becoming its first champion in 2016, followed by its first teenage winner in 2017, Wu Yibing. And in 2018, Zhang Ze became the first to win multiple titles. Now, Zhang Zhizhen joins his countrymen in securing a slice of history.

"I'm really happy," said Zhang. "I didn't think I would get it this week, so it's very nice for me. It’s never easy to play him and he played really good in second set. Barely made any unforced errors in return games. I managed to get the momentum back in the third set and adjust my mindset in the right place.

"I am very happy with this win and it seems like I always play well in Shenzhen. This city has become my special place. This title also helps me reach my goal for this season (Top 150). So lots of pressure released from my shoulder now. It is never easy to win any Challenger title."

Zhang Zhizhen is the champion in Shenzhen!

The first ever all-Chinese 🇨🇳 Challenger championship goes to the Shanghai native 63 46 61 over Li Zhe. pic.twitter.com/WIZemsnqEp

It was a second title for the Shanghai native nicknamed 'ZZZ', having prevailed in Jinan earlier this year. He rises to a career-high No. 141 in the ATP Rankings, sitting one spot off China's highest-ever ranking, earned by Wu Di three years ago.

The 23-year-old continues to capture the tennis headlines in his homeland, steadily building on a breakthrough quarter-final run at the former ATP Tour stop in Shenzhen in 2017. Just last month he secured two more tour-level victories in Zhuhai and Beijing, including an upset of World No. 34 Kyle Edmund at the China Open.

Li, meanwhile, was competing in his second Challenger final and first since 2017, when he finished runner-up in Bangkok. He will also rise to a career-high in the ATP Rankings, cracking the Top 200 at No. 194.

City of Playford Tennis International (Playford, Australia): One year ago, Jordan Thompson took the ATP Challenger Tour by storm in the final weeks of the season, lifting a pair of trophies on home soil and finishing with a tour-leading 52 match wins. This year, it's his countryman's turn.

James Duckworth claimed a tour-leading 44th match victory on Sunday, streaking to the title on home soil in Playford. He did not drop a set all week in securing his third trophy of the year, capped by a 7-6(2), 6-4 triumph over Yasutaka Uchiyama. Also the champion in Bangkok and Baotou, the Aussie rises 20 spots to No. 110 in the ATP Rankings. Like Thompson did in 2018, he is hoping to conclude his campaign inside the Top 100. Duckworth enters Kobe, Japan, next week as the fourth seed. 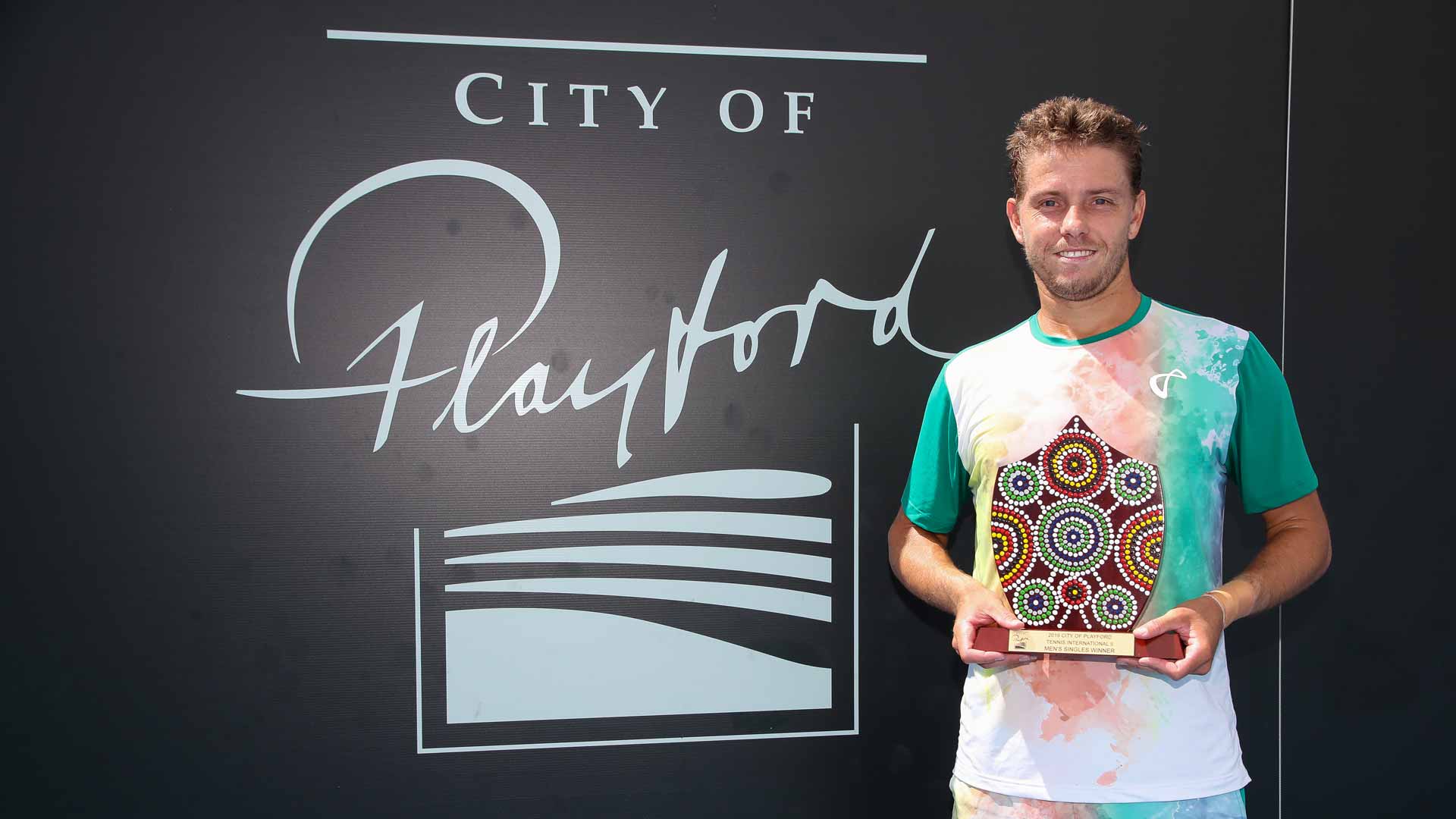 Challenger Eckental (Eckental, Germany): On Saturday, Jiri Vesely saved a match point to reach the final. One day later, the Czech was lifting the trophy at the House of Sports Eckental. Vesely ended the fairytale run of Steve Darcis, prevailing 6-4, 4-6, 6-3 to claim his seventh ATP Challenger Tour title and first since 2017. The 26-year-old rises 15 spots to No. 104 in the ATP Rankings.

Darcis, meanwhile, was competing in his final match on the Challenger circuit. The Belgian veteran, who announced he will retire from pro tennis in January, is a two-time ATP Tour champion and 10-time Challenger winner. 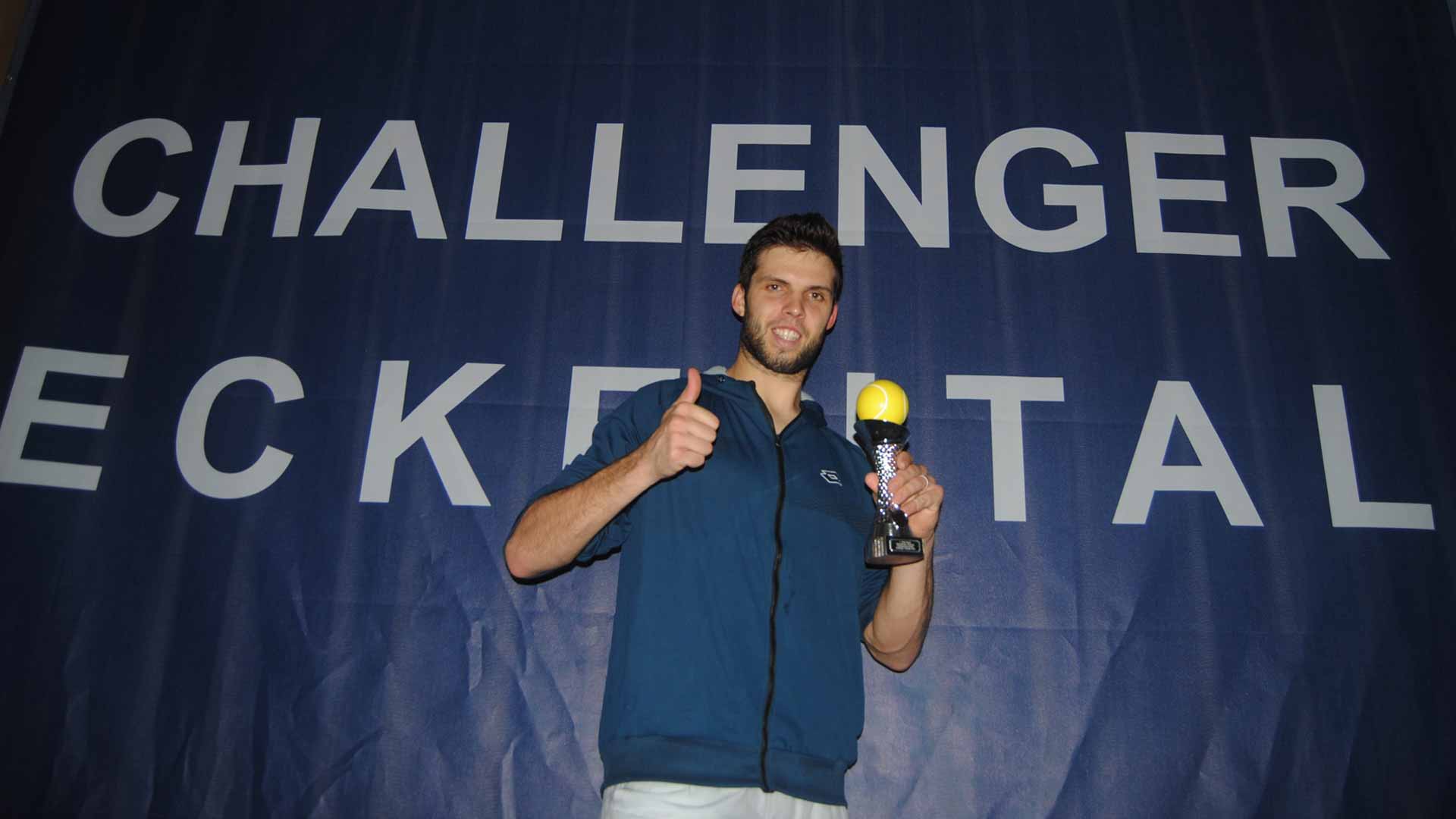 Former World No. 25 Pospisil, who is in the midst of a comeback from back surgery, is in a hurry to return to return to the ATP Tour. After streaking to the Round of 16 at the Rolex Shanghai Masters as a qualifier, he has reeled off 11 straight victories at the Challenger level. He did not drop a set on the outdoor hard courts of Las Vegas and relinquished only one on the indoor hard courts of Charlottesville.

You May Also Like: Challenger Q&A: Pospisil Goes Back-To-Back With Charlottesville Crown

He dropped just one set all week to triumph on Ecuadorian soil, including victories over a red-hot Thiago Monteiro and Juan Pablo Varillas. In addition, Seyboth Wild is the fourth different teen to win this year, joining Jannik Sinner, Nicola Kuhn and Corentin Moutet.

The 19-year-old 🇧🇷 has his first #ATPChallenger title, reeling off six wins in six days to triumph in Guayaquil.@thiagoswild | @challengye05 pic.twitter.com/iOySKDCIZJ

A LOOK AHEAD
Four tournaments on four continents highlight this week's slate. The Slovak Open in Bratislava welcomes a loaded field for the tournament's 20th edition. Seven players are inside the Top 100 of the ATP Rankings, including top seed Mikhail Kukushkin.

In Knoxville, a red-hot Tommy Paul leads the field, with Brayden Schnur and Bradley Klahn. And on the clay of Montevideo, home hope Pablo Cuevas targets a fourth tournament title.