Dominic Thiem hit 30 per cent of his forehands inside the baseline against Novak Djokovic on Tuesday evening in London.

Hawkeye Analysis: How Thiem Blasted His Way Past Djokovic In London

ATP Staff
This article contains:
Learn how pace paid dividends for the Austrian at The O2

Dominic Thiem defeated Novak Djokovic 6-7(5), 6-3, 7-6(5) in a two-hour, 47-minute epic at the Nitto ATP Finals on Tuesday evening. But the Austrian did not just win, he took the match from the five-time champion with brute force.

According to Hawkeye, not only did Thiem outpower Djokovic on the radar gun in the match — which in itself was not a surprise — but this year's BNP Paribas Open champion ramped up his velocity the most during crunchtime in the deciding set, especially on the forehand side. 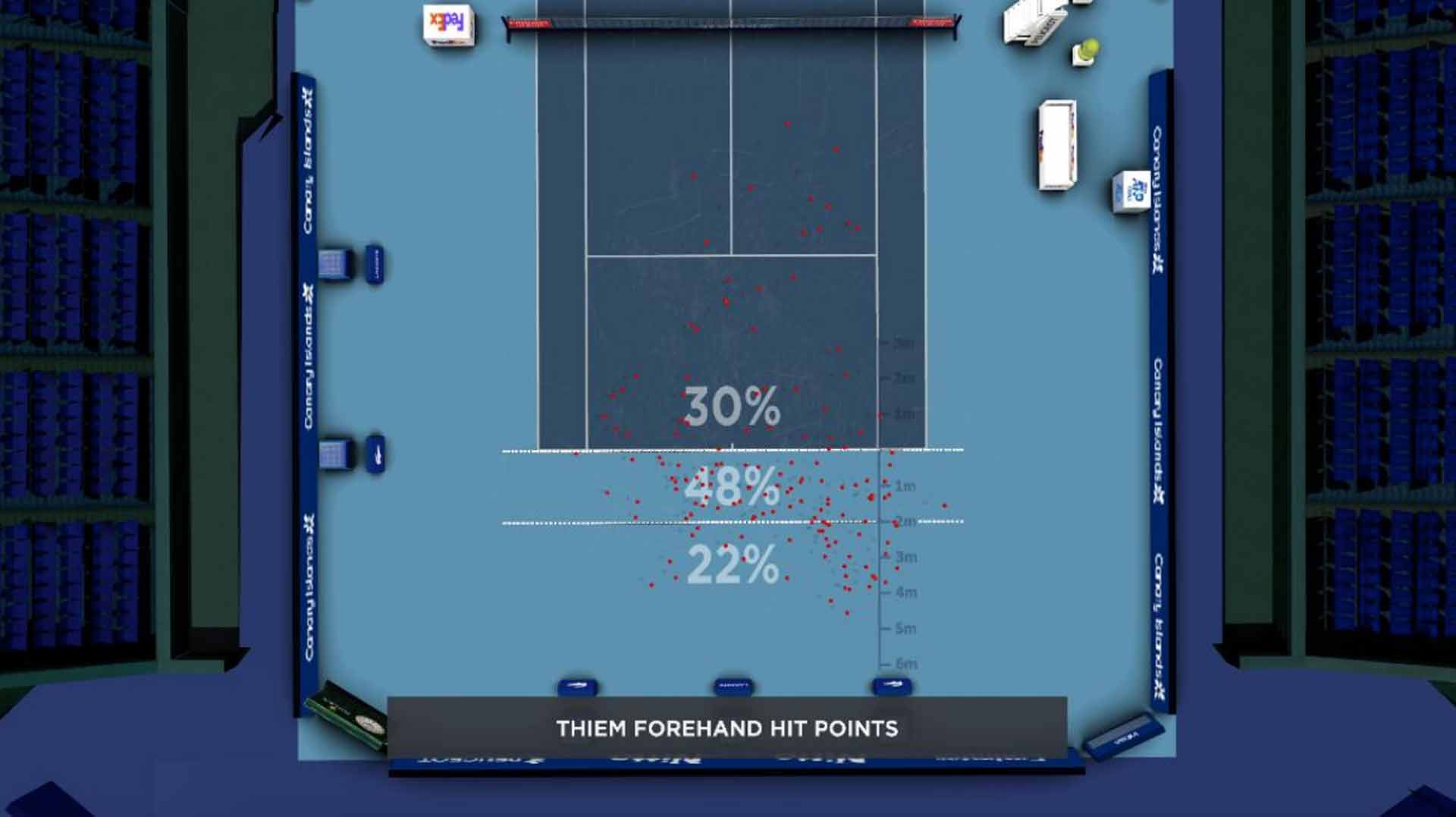 "I knew that I had to play like this to beat him. Against everybody who qualified for this tournament here, there is a special effort necessary to win. I did it against Roger, and I did it also today," Thiem said. "Probably Novak is the best player in the world right now, so I had to do something outstanding, something unusual, and that's what I did. I mean, I was hitting really, really hard."

Thiem hit his groundstrokes an average of six miles per hour quicker than Djokovic (74 mph vs. 68 mph). But the biggest difference came on the forehand wing. The Austrian's average forehand was 83 mph compared to 73 mph for the Serbian. In the deciding set, it was 85 mph to 72 mph for Thiem. His aggression paid off, as he hit 41 rally winners in the match to just 16 for Djokovic, earning a 14-2 winners advantage in the third set. 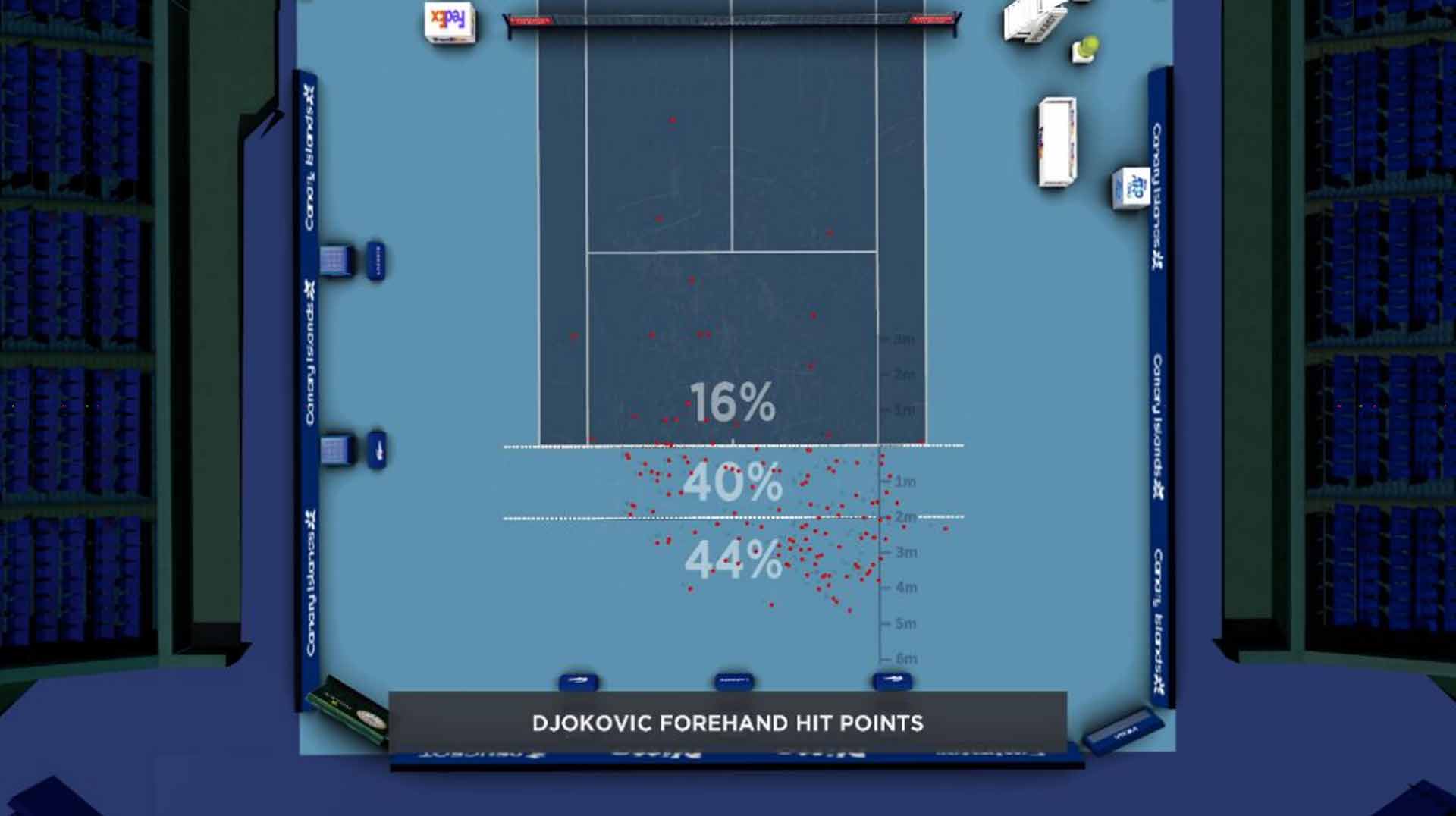 "I thought he deserved to win. He just played very courageous tennis and [was] just smacking the ball. He went for broke," Djokovic said. "The entire match he played [the] same way he played the last point. I mean, I have to put my hat down and congratulate him, because he just played a great match."

Thiem is known, especially on slower surfaces, for camping well behind the baseline on his return of serve to take a big swing at his strokes. But against Djokovic, Thiem did not give up much ground. The Austrian hit all of his returns between three metres inside the baseline and two metres inside it. He did not allow the World No. 2 to take control of the baseline. 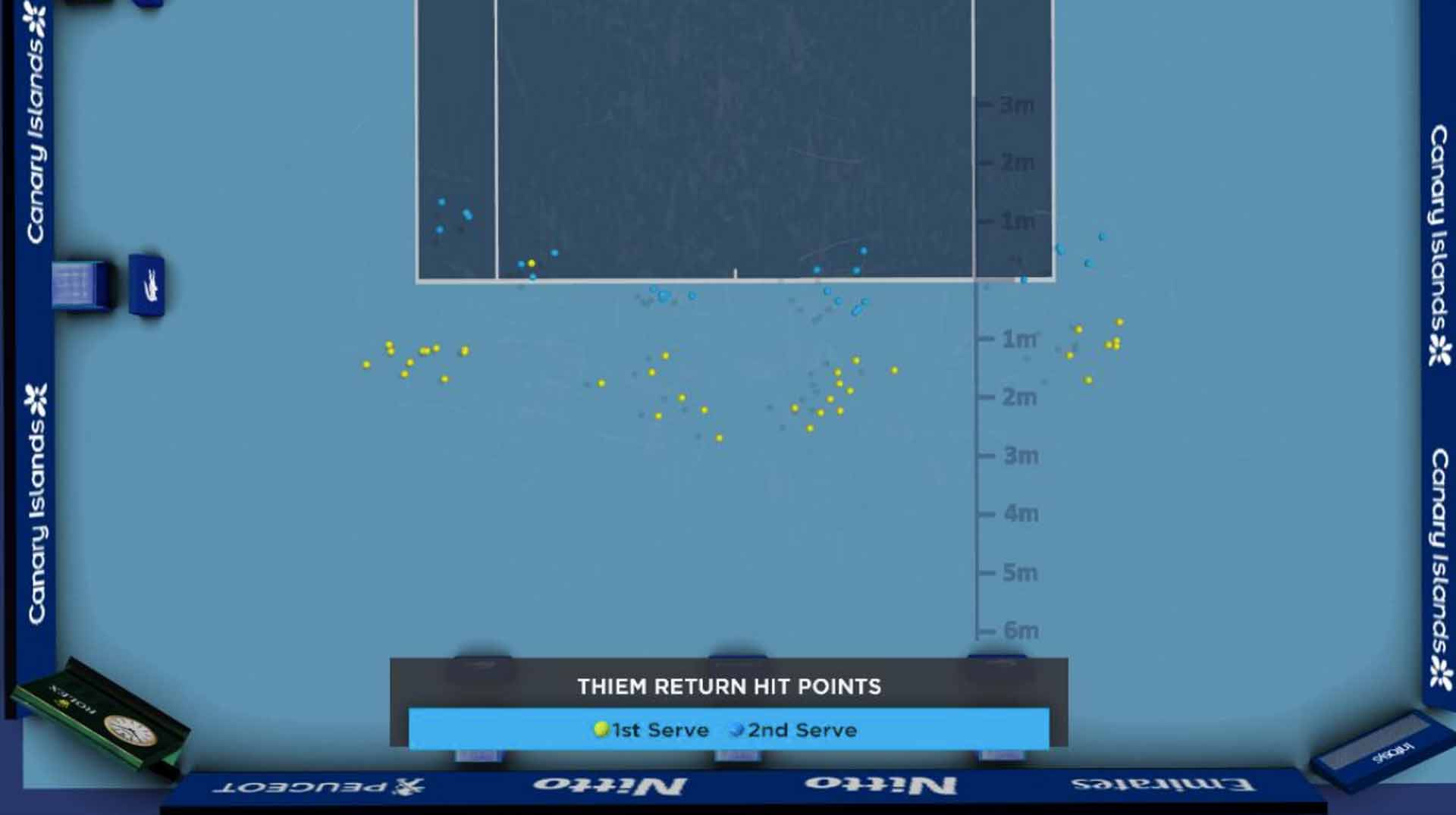 Djokovic, who is second among active players (behind Nadal) in return games won, had a similar return contact point. He took his on average just slightly forward of Thiem. 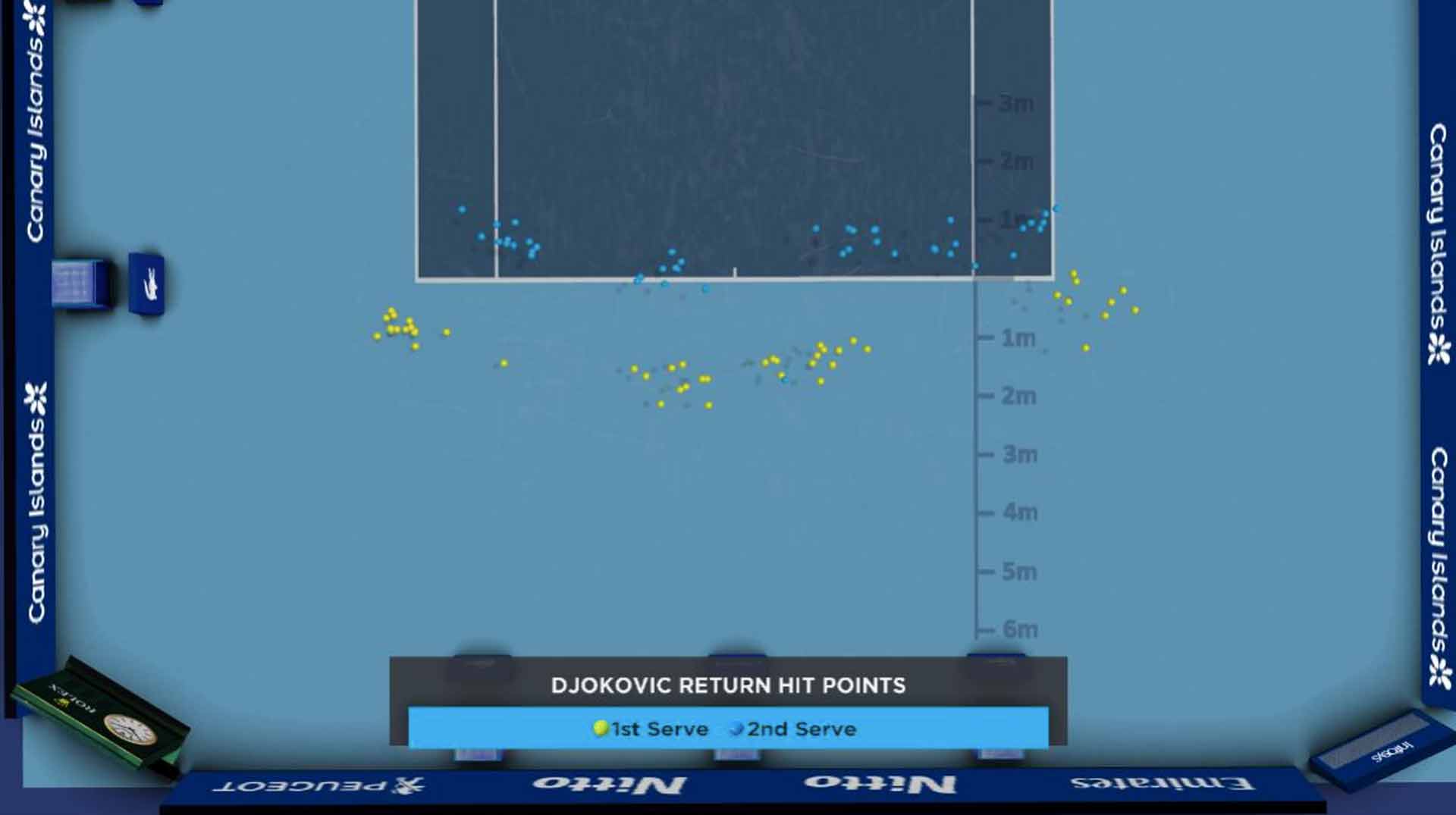 Thiem employed an interesting serve strategy against Djokovic, going to the 32-year-old's backhand with his first serve on both sides of the court. The Austrian targeted his backhand return 44 per cent of the time with his second serve, too. The only exception was his second serve in the ad court, where Thiem favoured the body serve at a rate of 47 per cent. 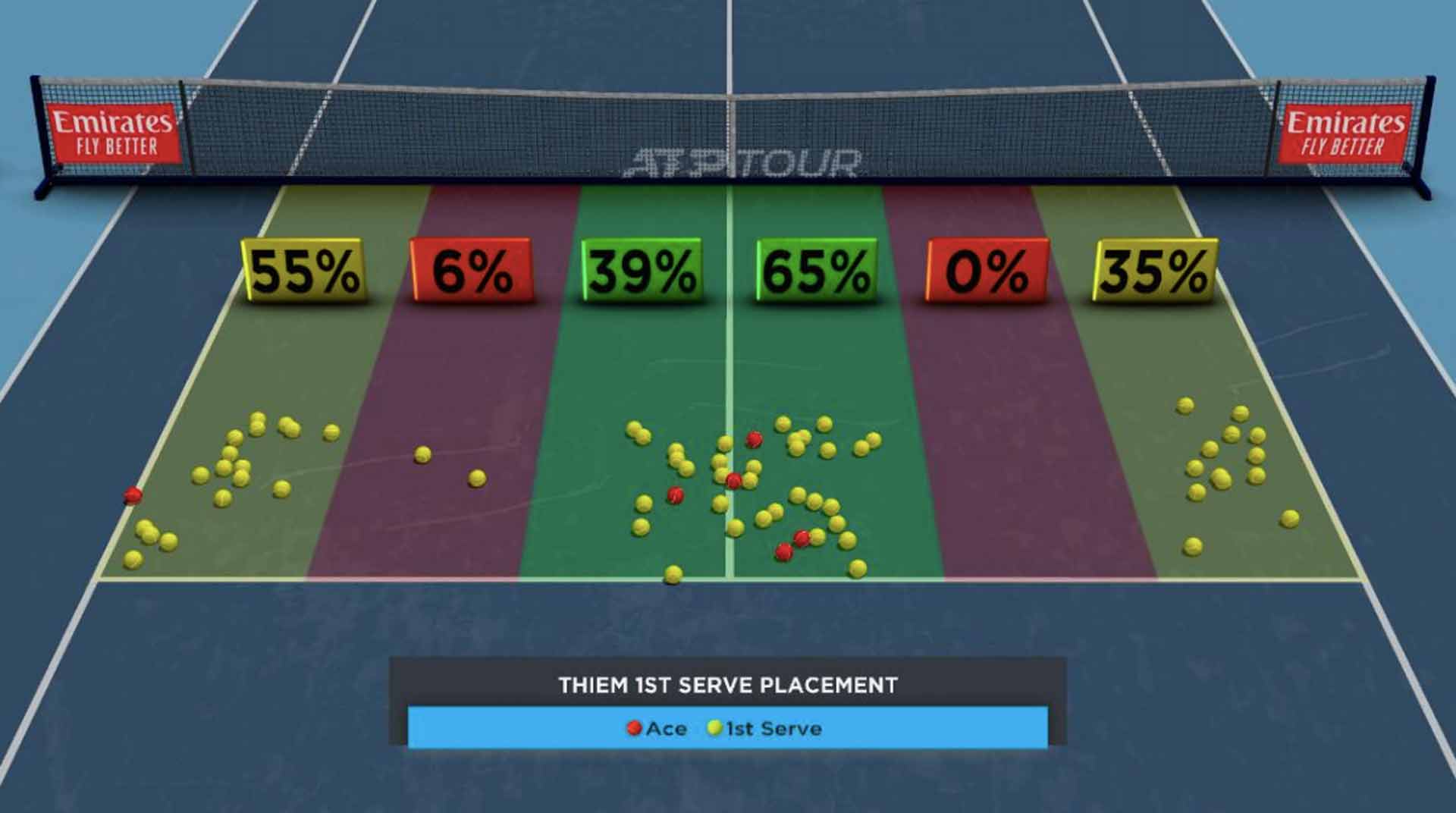 Did You Know?
Thiem outpowered Djokovic despite hitting far more slices than the Serbian. Twenty-two per cent of his groundstrokes were slices to just eight to Djokovic. And despite all the risks he took, Thiem hit more rally winners (41) than unforced errors (40).