ATP Staff
This article contains:
The 38-year-old Swiss advances to the London semi-finals

Novak Djokovic has long been one of the best returners in the world. But there was little he could do on Thursday evening as Roger Federer put on a serving clinic to book his spot in the semi-finals of the Nitto ATP Finals.

"The serve stats are clearly key to either hang with him or beat him. I did that in Paris. I did that in Wimbledon. Actually, I hardly got broken in those matches, too, and again tonight," said Federer, who saved the only break point he faced against Djokovic. "So against Novak it seems to work well on my serve."

According to Hawkeye, Federer consistently aimed for the easiest target on the court on both sides to elicit a plethora of free points. Federer made 73 per cent of his first deliveries, bombarding the 'T', where the net hangs slightly lower than it does out wide. 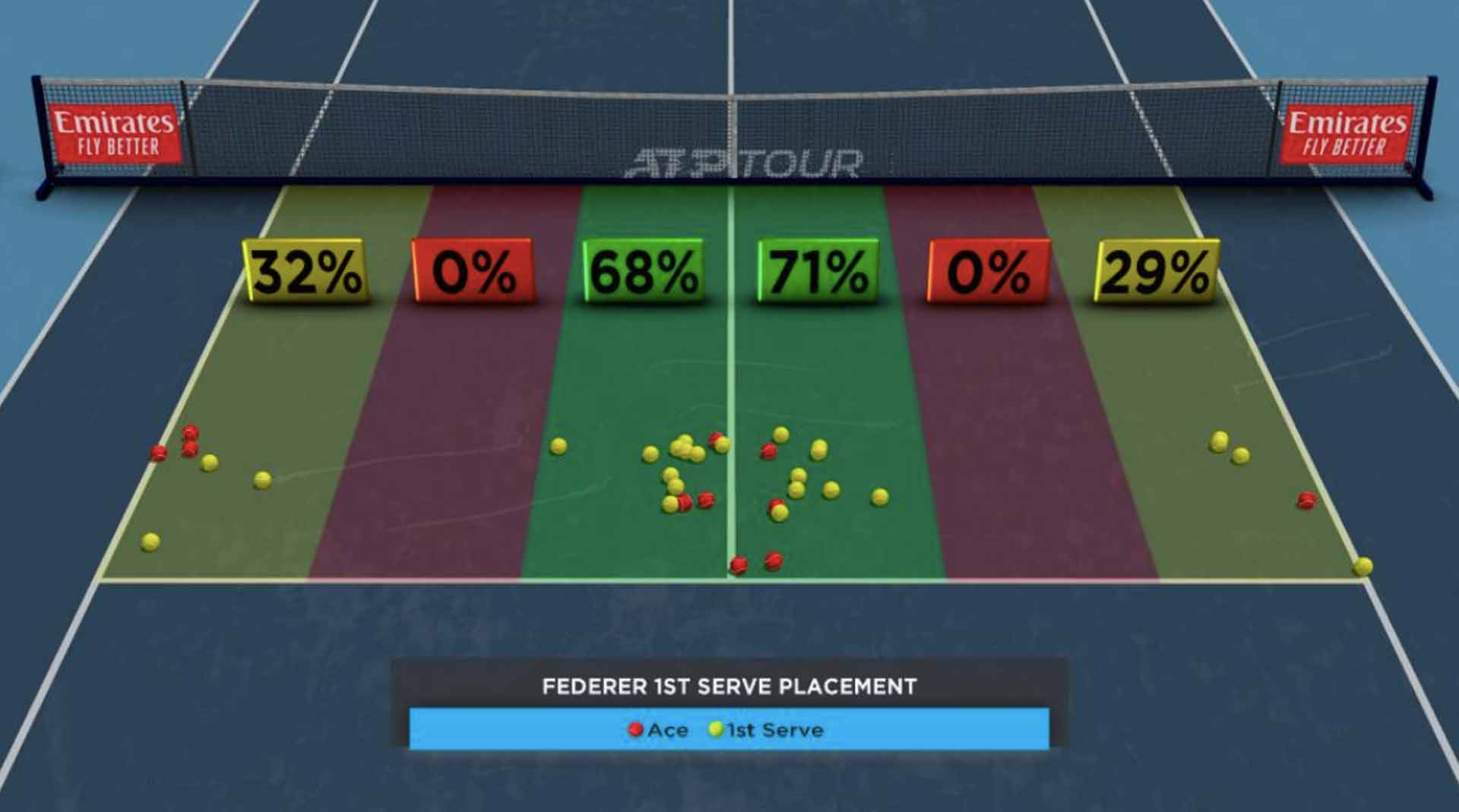 "To hit the spots the way I did today is definitely special. Also [it was good] just to be also strong on the shot that comes right after, and then being able to also produce good returns, because I thought I actually returned also very well today. I made a lot of returns," said Federer, who put 81 per cent of his first-serve returns into play.

Federer actually went down the 'T' far more often than he has done on average throughout 2019. According to Match Insights powered by Infosys Nia, Federer had targeted the 'T' in the ad court just 44.3 per cent of the time this season.

Federer was able to put far more first-serve returns into play, slicing 30 per cent of Djokovic's first deliveries to make sure he made those returns. The Serbian keyed in on Federer's forehand with his first serve in both the deuce and ad courts, but despite landing a higher rate of first serves than his 38-year-old opponent at 74 per cent, he only won 57 per cent of those points. 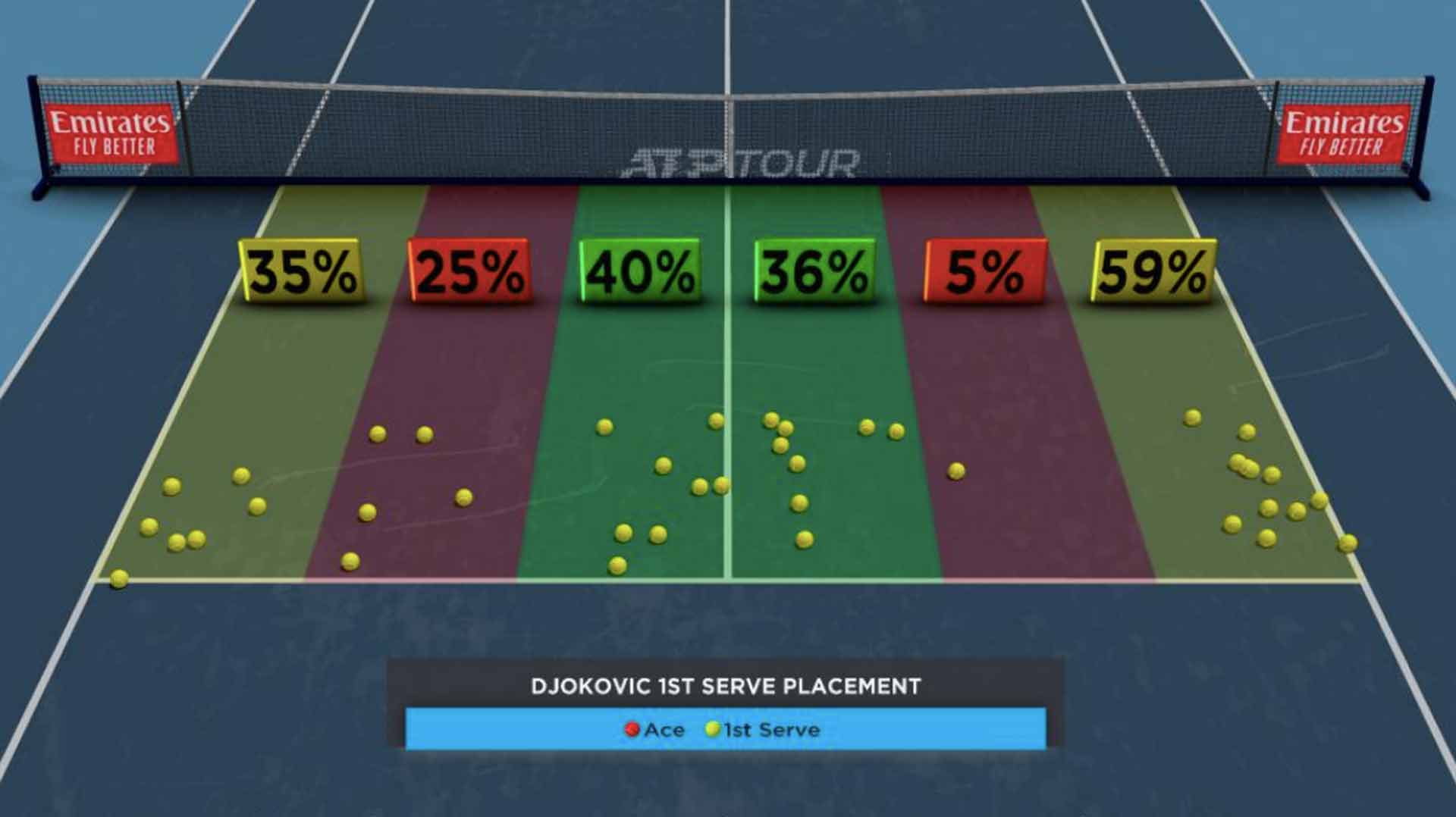 Federer shone on his second serve. He did not have to hit many of them (13, including two double faults), but when he did, he kept the elite-returning Djokovic off balance. The Swiss won more second-serve points (69%) than Djokovic earned first-serve points (57%), and he did so by switching tactics.

Federer went down the 'T' just twice — and not once in the deuce court — with his second serve. Fifty-four per cent of his second deliveries went unreturned. 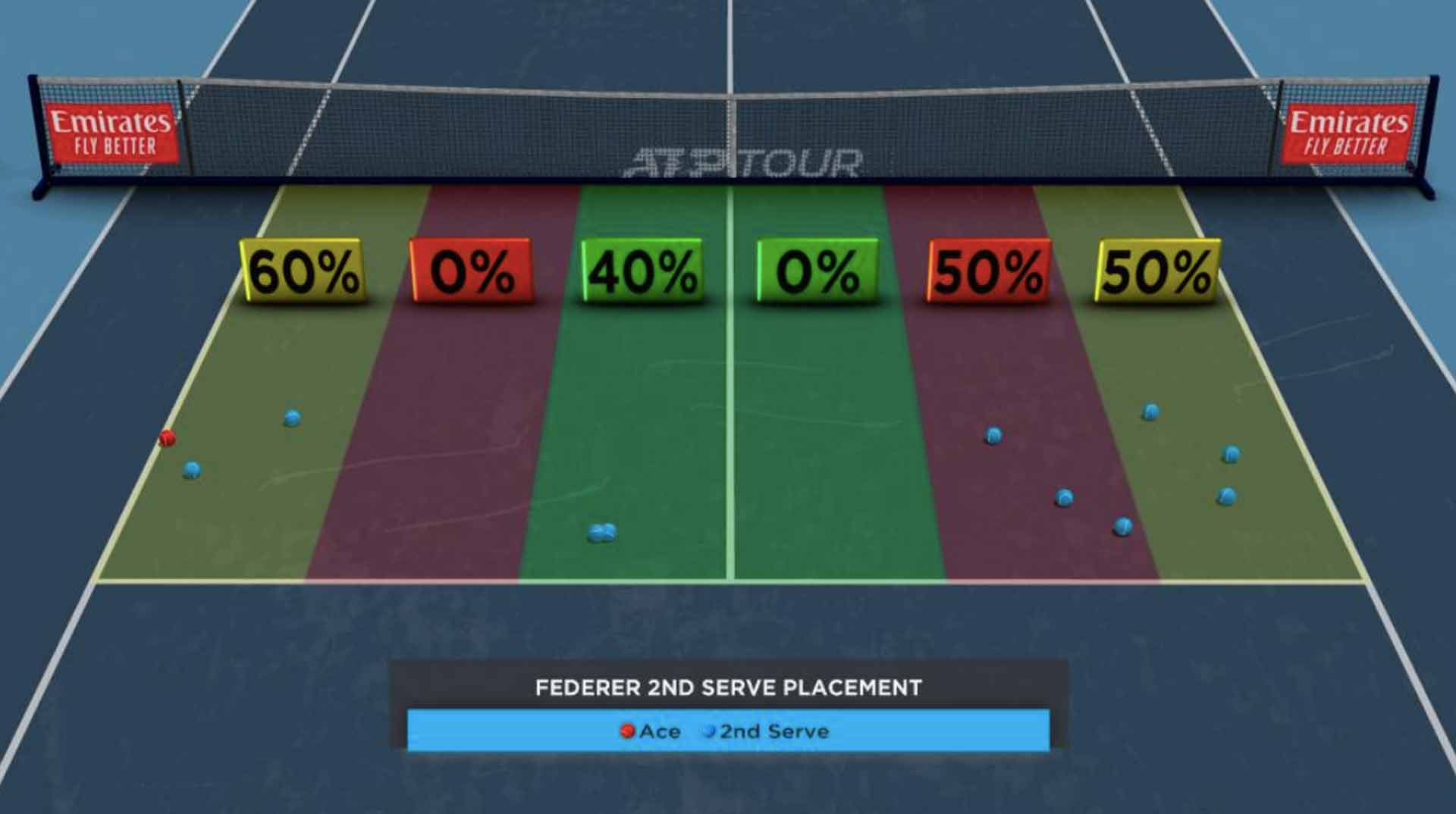 Federer's service efforts put pressure on Djokovic. When the Swiss did have to hit a second ball, he consistently played aggressively, hitting 11 rally winners to just three unforced errors in the match.

However, the six-time Nitto ATP Finals champion actually made contact inside the baseline less often than Djokovic (27% vs. 37%), as the Serbian was keen on taking back control in rallies due to Federer's big shots early in rallies. 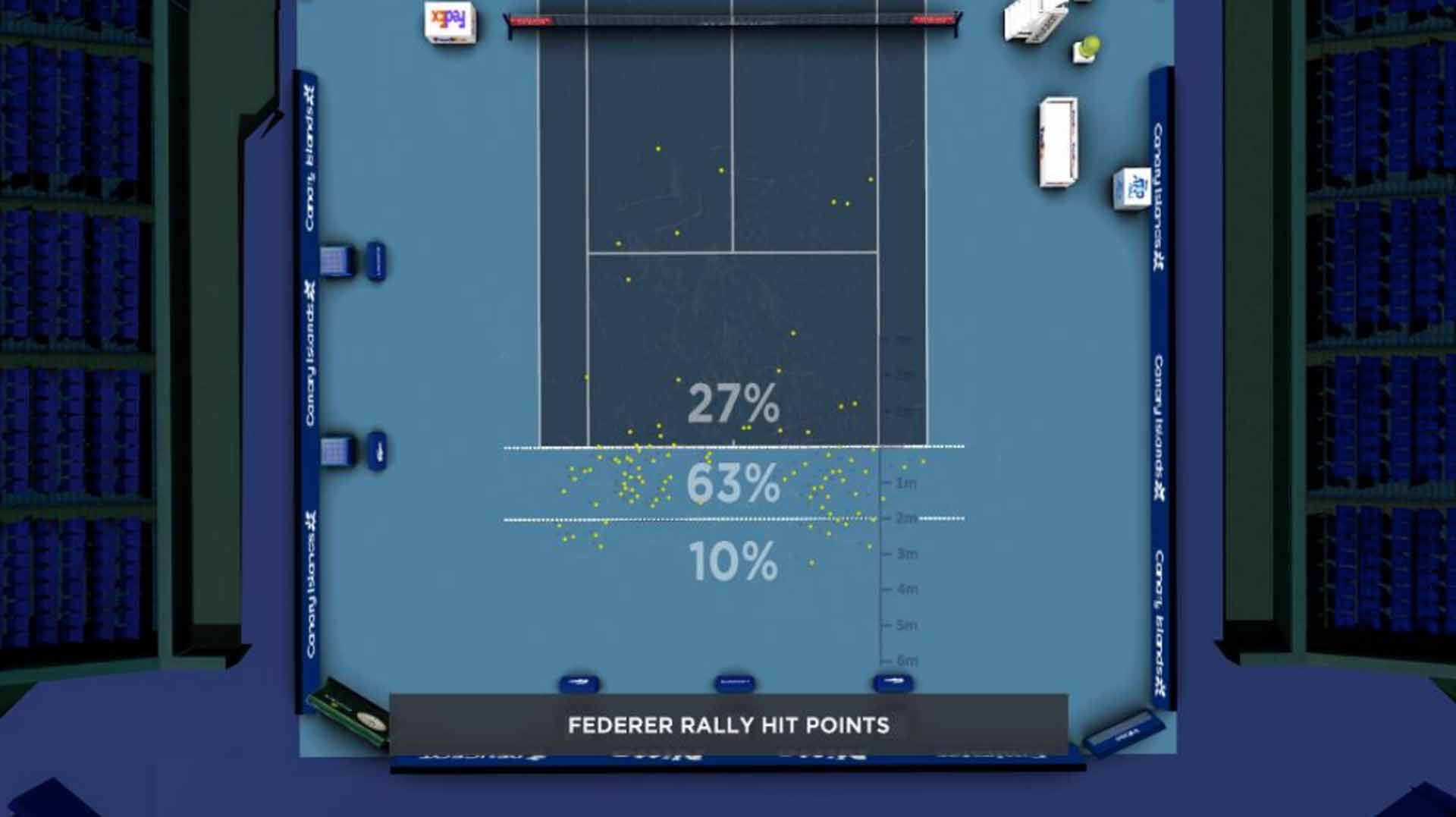 This led to more mistakes from Djokovic, who made 10 unforced errors once rallies began, including seven in the second set.

"When I was in the rallies, he felt the need to play extremely aggressive, because if he didn't, I was always going to take a big cut at the ball," Federer said. 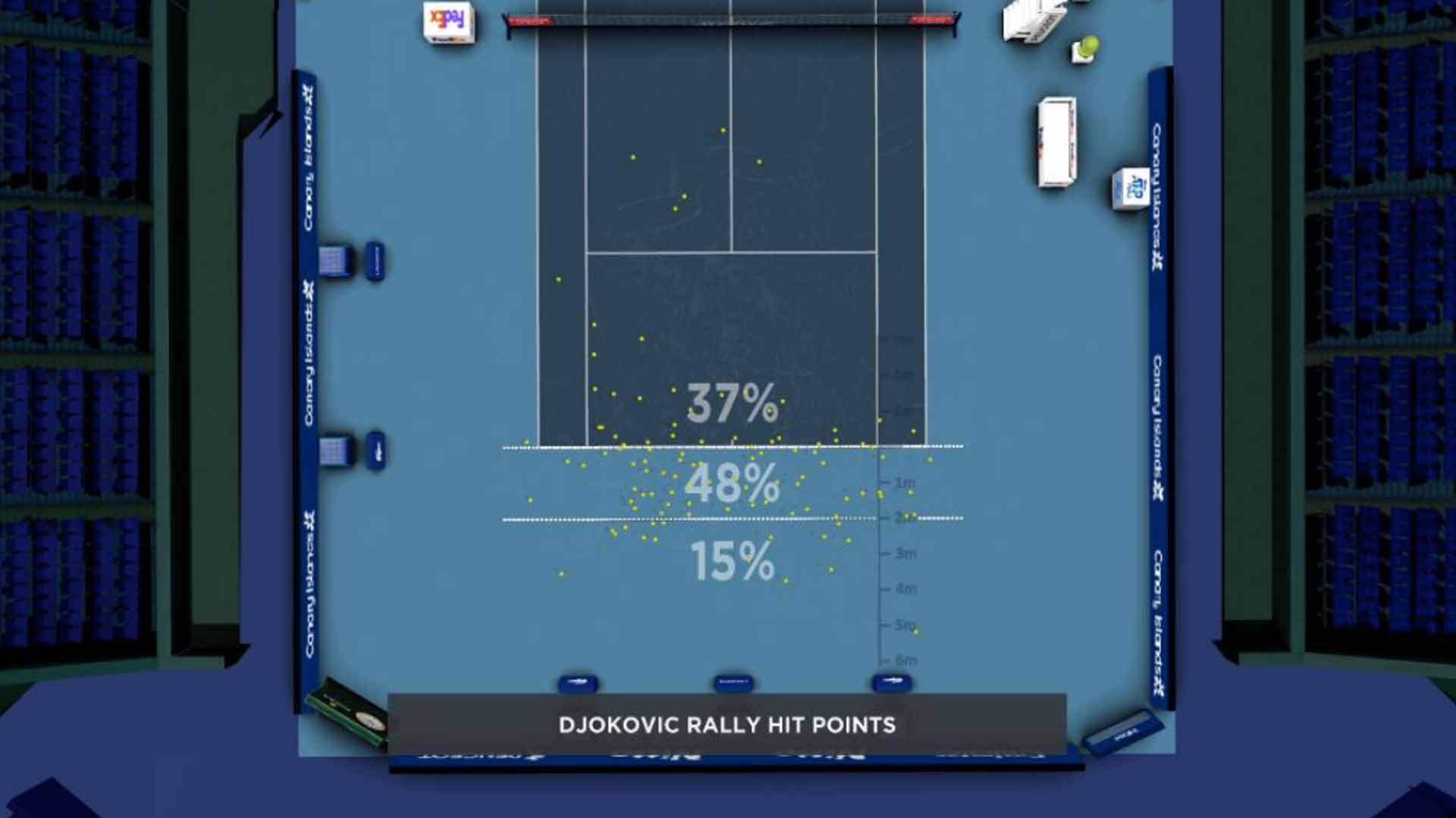 Djokovic succeeded in rallies that lasted more than nine shots, winning six of the seven points that went that long. But Federer dominated any rally that was shorter, 65-36. A good chunk of that advantage came from Federer's far higher number of serves that went unreturned, and that is why the Swiss is moving into his 16th Nitto ATP Finals semi-finals in 17 tries.