2018: At 36 years of age, Roger Federer becomes the oldest player to hold the top spot in the ATP Rankings. He also now holds the record for the longest period between stints at No. 1.

2018: An emotional Roger Federer celebrates following his quarter-final win over Robin Haase in Rotterdam, a victory which ensures his return to World No. 1 for a fourth time.

2017: Roger Federer returns from a six-month injury lay-off with a No. 17 ATP Ranking at the Australian Open, and proceeds to capture his first Grand Slam title since 2012 with a five-set win over Rafael Nadal in the championship match.

2012: Roger Federer guarantees that he will reach 300 weeks at World No. 1 with his semi-final showing at the Shanghai Rolex Masters.

2012: A week after returning to the top of the ATP Rankings with his triumph at Wimbledon, Roger Federer starts his 287th week at No. 1 to break the record previously held by his idol, Pete Sampras.

2012: Roger Federer regains the No. 1 ATP Ranking for a third time after defeating Andy Murray to win a record-equalling seventh Wimbledon trophy.

2009: Roger Federer becomes only the second player to regain the year-end No. 1 ranking after Ivan Lendl, finishing the season atop the ATP Rankings for a fifth time overall.

2009: With his marathon victory over Andy Roddick at Wimbledon, Roger Federer reclaims the No. 1 ATP Ranking and clinches a 15th Grand Slam title to break the record he shared with Pete Sampras.

2007: Roger Federer takes in the view of 'The World' from a helicopter flight in Dubai as he begins his 161st consecutive week at No. 1, breaking the record Jimmy Connors set 30 years earlier.

2007: Roger Federer wins a Grand Slam title without the loss of a set for the first time at the Australian Open, becoming the first player to win a Slam title in such fashion since Bjorn Borg at Roland Garros in 1980.

2006: Roger Federer caps off another season to remember with triumph at the Tennis Masters Cup in Shanghai, finishing with a career-high 12 titles. 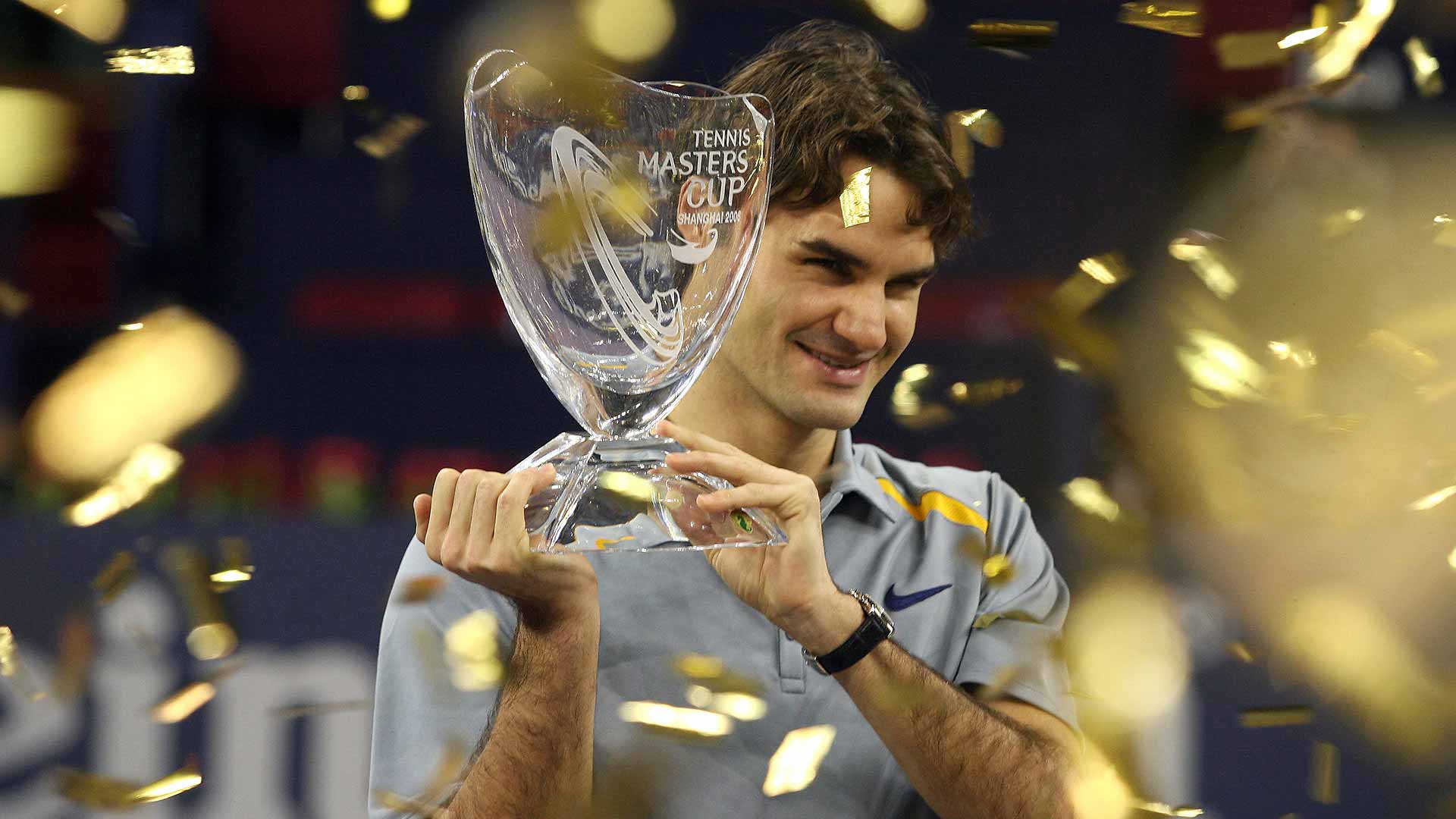 2005: For a second straight year, Roger Federer finishes as the World No. 1 with an ATP World Tour-best 11 titles.

2005: Roger Federer bounces back from a loss to Rafael Nadal in the Roland Garros semi-finals to compile a 35-match winning streak and five titles, starting with his run at the Gerry Weber Open in Halle.

2004: After compiling one of the best seasons in nearly two decades by capturing an ATP-best 11 titles in as many finals, including three Grand Slams and three Masters 1000 trophies, Roger Federer receives the No. 1 trophy during the unveiling of the 2005 Official Guide cover in Houston.

2004: Roger Federer receives a cake during the Australian Open in recognition of his rise to the No. 1 ATP Ranking on 2 February. 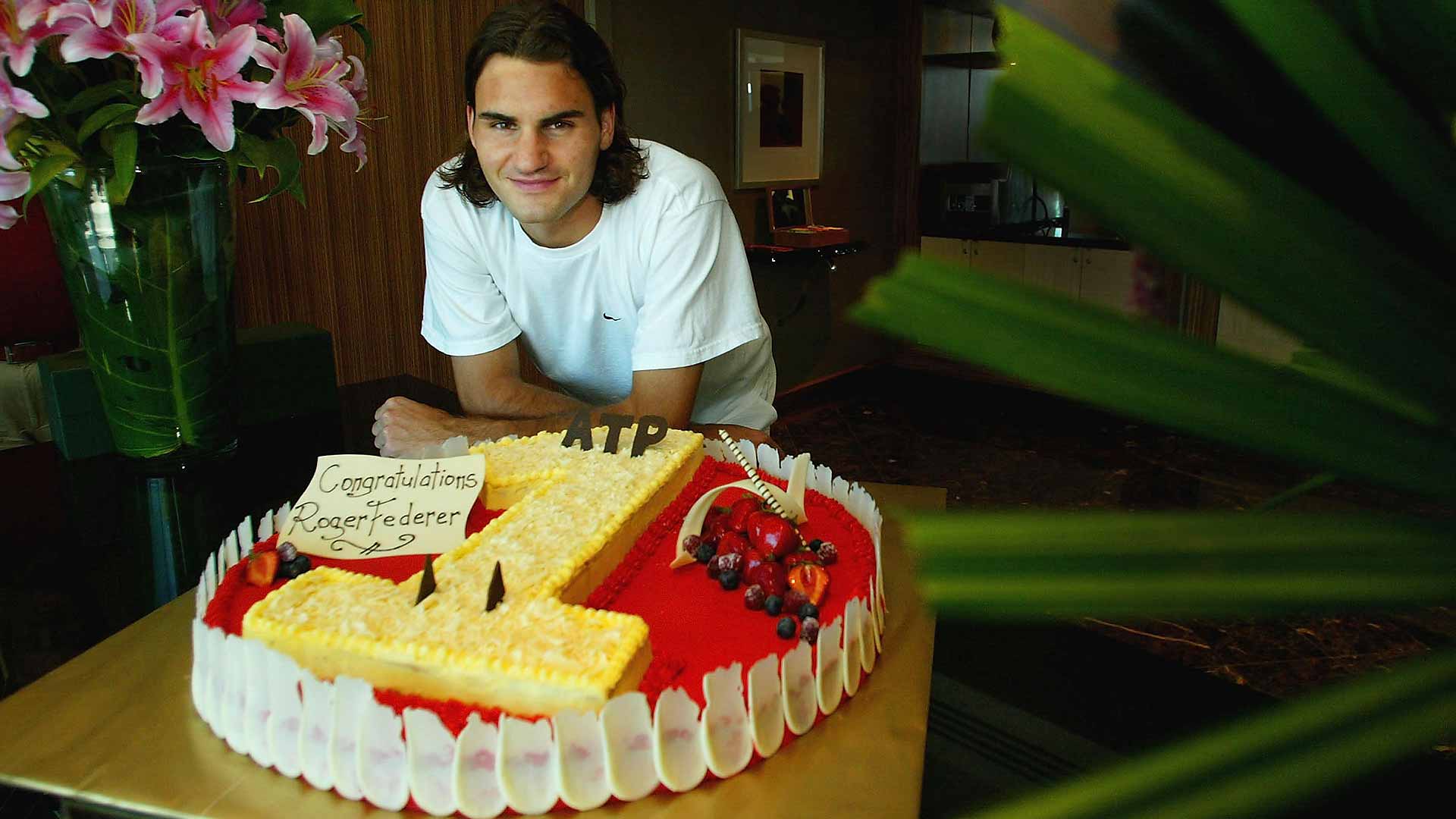 2004: With his victory over Juan Carlos Ferrero in the Australian Open semi-finals, Roger Federer ensures he will overtake Andy Roddick at the top of the ATP Ranking on 2 February.

Federer Smashes Records In Return To No. 1

Federer returns to No. 1 more than 14 years after he first sat atop the ATP Rankings

More than 14 years after he first became No. 1, Switzerland’s Roger Federer today returned to the top of the ATP Rankings for a historic fourth stint at the pinnacle of men’s professional tennis. Federer, who began his 302nd week at No. 1 on 29 October 2012, breaks a number of ATP Rankings records by replacing his great rival, Spain’s Rafael Nadal, in top spot.

Just 13 months ago, Federer returned from a knee injury at No. 17 in the ATP Rankings and has since compiled a 64-5 match record — including nine titles from 10 finals — in that period. Today, he now holds records for the longest period between stints at No. 1, as the oldest player to attain top spot and for the longest duration between first and last days at the summit of men’s professional tennis.

"I think reaching No. 1 is the ultimate achievement in our sport,” said Federer. “This one maybe means the most to me [of any achievement] throughout my career, getting to No. 1 and enjoying it right here at 36, almost 37 years old. [It] is an absolute dream come true, I can’t believe it."

Federer is guaranteed to remain at No. 1 in the ATP Rankings through to 18 March, but the battle for top spot between the Swiss and Nadal will resume at the BNP Paribas Open, the first ATP World Tour Masters 1000 tournament of the year, which begins on 8 March.

Federer returns to top spot for the first time since 4 November 2012, five years and 106 days ago – the longest period of time between stints at World No. 1. At 36 years of age, Federer is also the oldest player to become No. 1, eclipsing the record of American Andre Agassi, who last held top spot aged 33 on 7 September 2003.

Chris Kermode, ATP Executive Chairman and President, said, “Roger has spent his whole career rewriting the record books, but to reach the pinnacle of men’s professional tennis again at the age of 36 is hard to imagine. His longevity at the top of the game is simply remarkable. As he begins a fully deserved fourth stint at No.1 in the ATP Rankings, we congratulate him on yet another incredible record in his glittering career.”

You May Also Like: Social Media Reacts To Federer’s Return To No. 1

Federer’s return to the summit of the men’s game was guaranteed by beating Dutchman Robin Haase for a place in the ABN AMRO World Tennis Tournament semi-finals on Friday. Federer went on to beat Grigor Dimitrov in Sunday’s final at the Rotterdam Ahoy for the 97th tour-level trophy of his career.

LONGEST GAP BETWEEN STINTS AT NO. 1

FIRST AND LAST DAY AT NO. 1

Open Gallery
More stories like this in:
ATP Premier Partner