"They're Like Racehorses": Johnson, Dimitrov Impress Hockey Pros In Toronto

Steve Johnson has watched plenty of hockey games over the years. An avid fan of the Anaheim Ducks, the Southern California native came up big in the Sportsnet Ball Hockey Challenge presented by Knapper on Sunday at the Rogers Cup in Toronto, scoring the game-winning goal in the closing minutes to lead the black team to a 6-5 victory.

“I just shoot it on net and hope for the best!” said Johnson. “It’s just fun doing something completely out of the tennis world. I love following the NHL, so it’s great to see these guys out of their element, come here to the tennis. I’m definitely excited that the hockey season is only a couple months away, and I’ll get back to watching, so it’s very exciting to be out here.”

Johnson teamed up with the likes of Hockey Hall of Famer Doug Gilmour and current NHL stars Jason Spezza, Mark Scheifele and Dominic Moore in the annual Rogers Cup game featuring past and present hockey and tennis pros.

You May Also Like: Scouting Report: 10 Things To Watch In Toronto
“Big goal for him, eh?” said Gilmour, who also played for the black team. “Game winner, that’s awesome. It’s our pleasure to be out here with these guys. They’re athletes, and playing in this heat all the time, and training, you can tell how fit they really are. You can tell they’re like racehorses. They’re fast. Their condition is amazing.”

Top doubles players Oliver Marach, Mate Pavic, Nikola Mektic and Alexander Peya participated in the ball hockey game, along with Canadians Frank Dancevic and Felix Auger-Aliassime. Wimbledon finalist Kevin Anderson stopped by to meet the NHL players, while World No. 5 Grigor Dimitrov came to watch the action before taking part in a shootout.

“They did great, especially Grigor,” said Moore, who played for the Toronto Maple Leafs this past season. “He never really held a stick before and he came out pretty comfortable. Felix looked like he didn’t even break a sweat and he was running hard. It shows how good of shape these guys are in.” 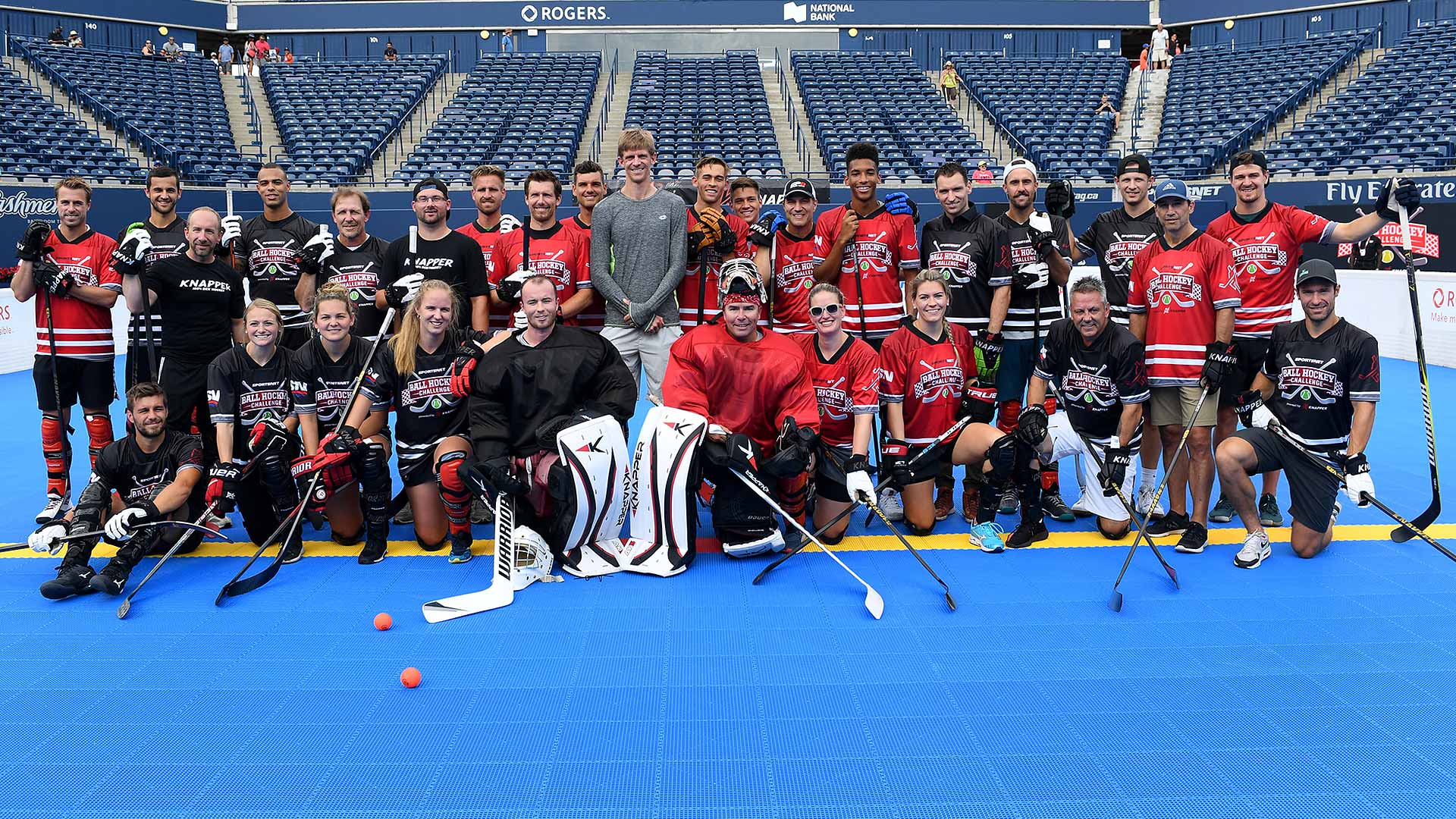 Spezza of the Dallas Stars also remarked how impressed he was with the ATP stars’ conditioning, particularly praising the #NextGenATP Canadian. “Felix’s game is good,” he said. “We get like 30 seconds and we’re tired, and he can run for days! We might have a little better hands on the hockey stick, but they got us in fitness.”

Auger-Aliassime, 17, agreed with his assessment. “That’s for sure. I played it on the physical part,” he said. “My stick handling was not that good, my finishing also. At least I can run, play offense, defense, so that’s what I tried to do.”

Moore looked forward to watching Auger-Aliassime and fellow Canadians including Milos Raonic, Denis Shapovalov, Vasek Pospisil and Daniel Nestor on the court at the ATP World Tour Masters 1000 tournament. The 38-year-old, who like Raonic hails from nearby Thornhill, anticipated an exciting week of tennis ahead, with 25 of the Top 27 players in the ATP Rankings competing.

“Obviously it’s a great time to be a Canadian tennis fan with Milos and Denis doing as well as they are and the excitement with Felix,” said Moore. “I’ll be watching closely this tournament. There are a lot of exciting match-ups even in the first round of this year’s Rogers Cup. It might even be one of the best draws ever.”