Nick Kyrgios is the top-ranked Australian in this year's draw.

“That's definitely one of the best wins of my career, I think," said Kyrgios.

The 24-year-old advanced to the fourth round in Melbourne for the third time, landing 97 winners en route to victory. The six-time ATP Tour titlist failed to convert match points in both the third and fourth-set tie-breaks, but maintained his composure to advance after four hours and 26 minutes. Competing in his 20th match at the opening Grand Slam of the year (14-6), Kyrgios levelled his ATP Head2Head series against Khachanov at 1-1.

"That was definitely one of the craziest matches I've ever been a part of. It was insane," said Kyrgios. "Had a match point in the third, a match point in the fourth. Then 8/7 down, I had all the thoughts. I thought I was going to lose. I was thinking about everything... It was crazy.” 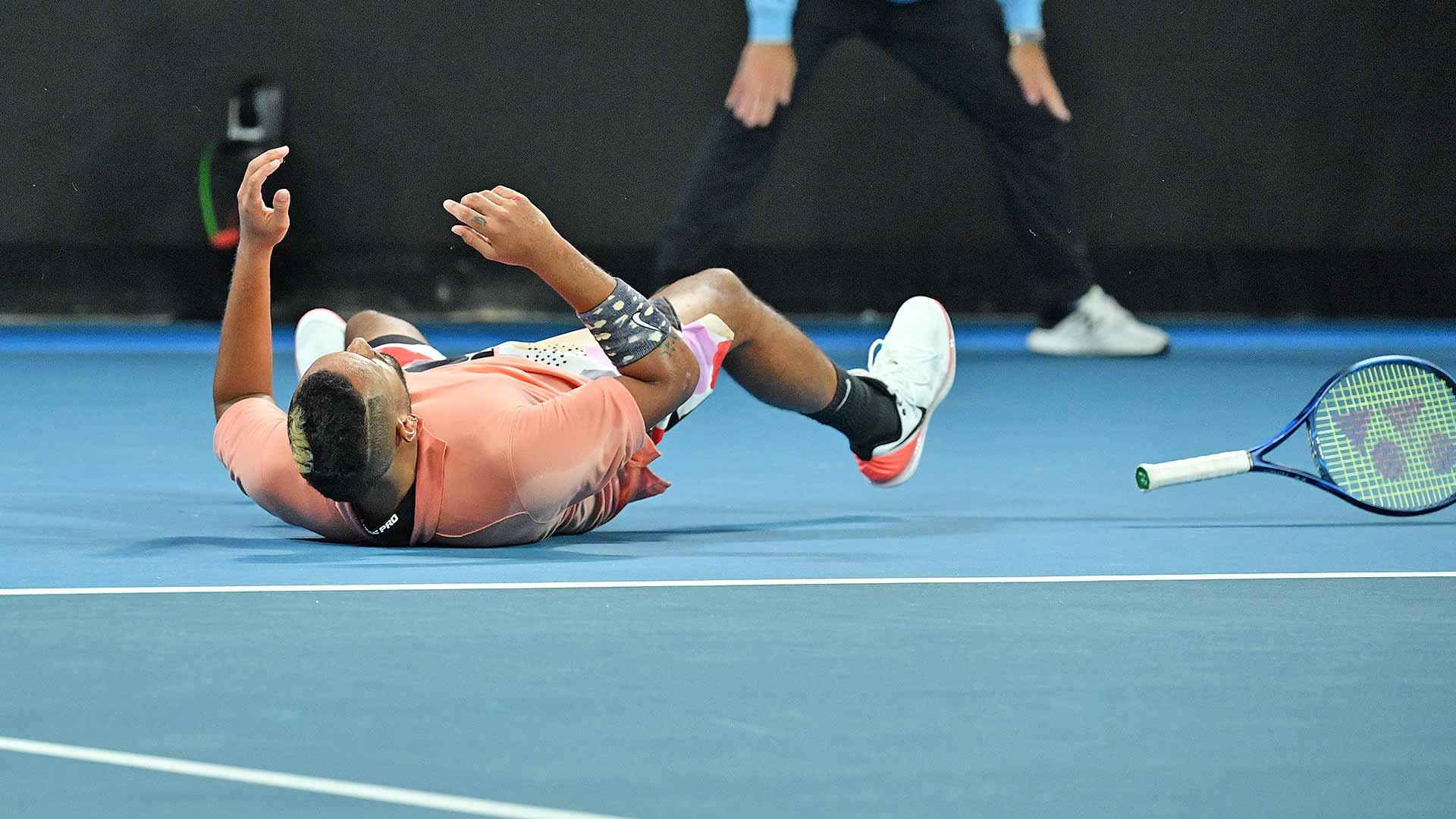 Kyrgios will attempt to reach 4-4 in his ATP Head2Head series against Nadal on Monday. The World No. 26 owns two wins from three matches on hard courts against the 19-time Grand Slam champion, including a final-set tie-break victory en route to the Acapulco title last year.

“I'm super excited, honestly. Playing one of the greatest tennis players on centre court at your own Slam, it's pretty damn cool,” said Kyrgios. “I've got a lot of time between now and then. Obviously, it's going to be another physical battle. Nothing comes easy with him. He had a relatively routine match today, so he's going to be feeling good. I'm looking forward to it. That's why you play.”

In front of a packed crowd on Saturday night at Melbourne Arena, Kyrgios mixed topspin forehands and flat backhand strokes to great effect. The highest-ranked Australian in the draw took advantage of groundstroke errors from his opponent to claim the opening set after 34 minutes.

A tie-break was required to decide the outcome of the second set, with both players unable to convert the only break-point chance they created. Kyrgios kept his composure, using great feel to shorten points while picking the right moments to increase the speed of his groundstrokes. The Aussie claimed a two-set lead with a powerful serve up the T.

Kyrgios was handed the first break of the third set at 2-2, as Khachanov committed two double faults and made groundstroke errors. But the Russian fought back to level the set at 4-4, landing pinpoint returns as Kyrgios attempted to shorten points. After saving match point with a powerful serve at 5/6 in the tie-break, Khachanov forced a fourth set as Kyrgios misfired with a cross court forehand. 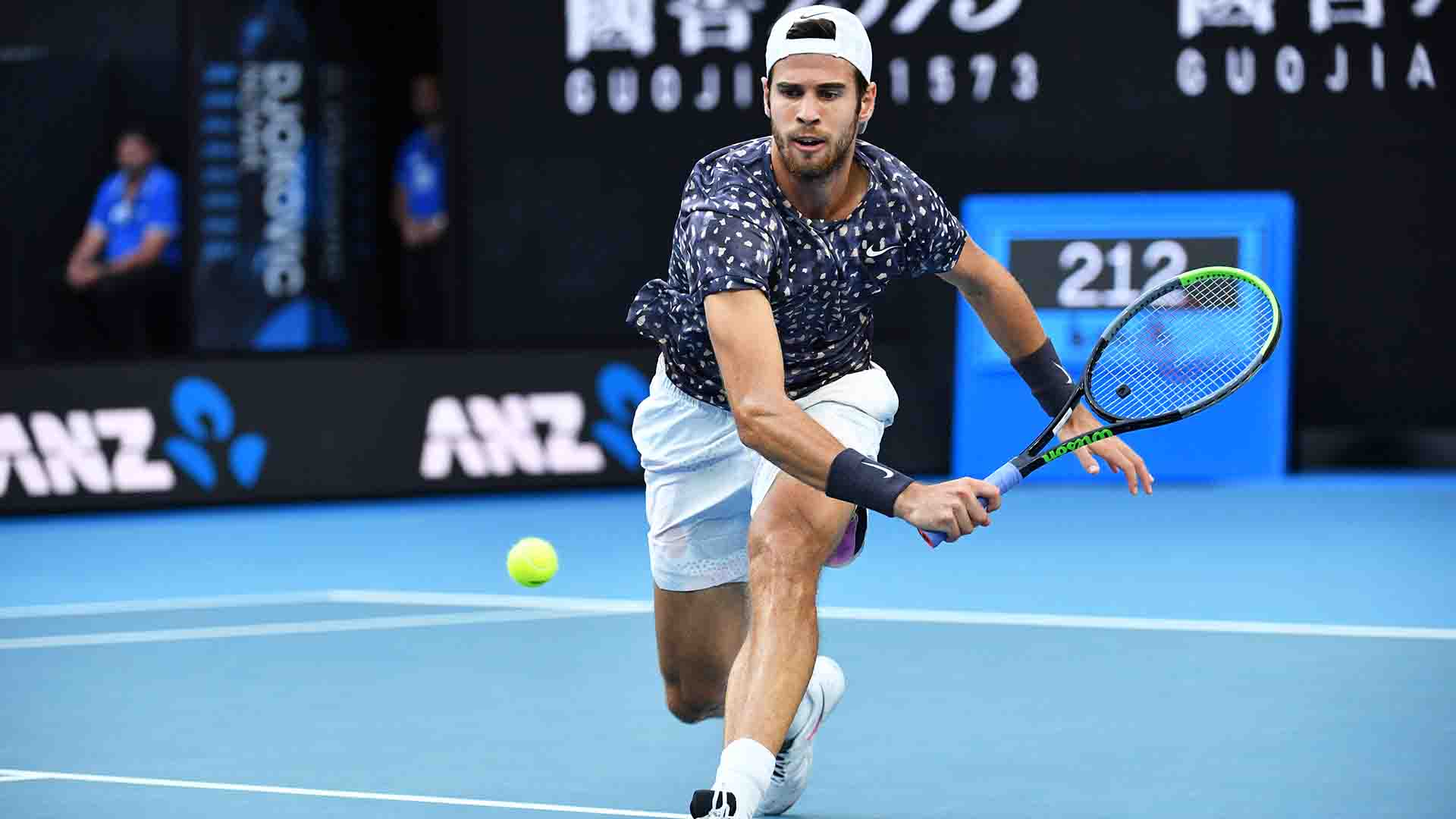 Kyrgios entertained the crowd in the fourth set, diving across the court and moving to the net to win rallies with great variety. But Khachanov matched the Aussie to reach a third tie-break, dropping just five points behind his serve. The 6’6” right-hander moved up the court to take time away from his opponent, saving a second match point before taking the match to a decider following success in an extended backhand rally.

Neither player manufactured a break-point opportunity in the deciding set, with the match requiring a 10-point tie-break to decide the winner. Kyrgios claimed an immediate mini-break, snapping Khachanov’s run of 19 consecutive points on serve to gain a 3/0 lead. But Khachanov soon ended his opponent’s own serving streak of 12 points to get level the score. Trailing a mini-break at 7/8, Kyrgios won three straight points to claim the win.

The match came down to three backhands. Kyrgios took a chance and found the corner to level for 8/8, before Khachanov missed the mark on consecutive points. The Aussie collapsed to the court in celebration after securing the win, soaking in the cheers from all corners of Melbourne Arena.

“I think the crowd is awesome,” said Kyrgios. “They get a bit rowdy in there. Adding tonight's experience on that court, I've had such good memories in there. I love playing there. I don't know, I just feel at home.”

Khachanov was aiming to reach the Round of 16 at Melbourne Park for the first time. The 23-year-old, who fell at the same stage last year (l. to Bautista Agut), drops to 6-3 this year. Khachanov opened the 2020 ATP Tour season with four wins from five matches, as Team Russia reached the semi-finals at the inaugural ATP Cup.

“[Karen is] not given enough credit," said Kyrgios. "He played like four hours [and] something in his previous match. To come back out and put on a performance like that, I thought the level at the end was crazy.”