Nick Kyrgios is looking to reach the Australian Open quarter-finals for the second time this fortnight.

Contrite Kyrgios 'Gets To Work', Gets Job Done

Nick Kyrgios belted his way past Gilles Simon 6-2, 6-4, 4-6, 7-5 to reach the third round of the Australian Open on Thursday night.

Kyrgios was up a break and serving at 4-3 in the third set. But the French veteran broke Kyrgios twice to force a fourth set as the top-seeded Aussie in the men's singles draw looked increasingly irritated.

Kyrgios, however, regrouped in the 11th game of the fourth, returning to his aggressive ways to break Simon and enliven the packed Melbourne Arena, Kyrgios' favourite place to play at Melbourne Park.

You May Also Like: Thiem Survives In Five Against Bolt

“I knew that if it went five sets, it would have been very tough physically, especially going up against a guy like that, with the conditions being very slow," Kyrgios said. "But I thought I lifted in the fourth. I just put my head down. I lost my way a little bit in the third set. I put my head down, I told myself, 'Just cut the bull**** and just get to work.' I got the break at five-all. It was a good feeling to get through that.”

The 24-year-old is through to the round of 32 at his home Grand Slam for the fourth time. He is looking to advance to the quarter-finals in Melbourne for the second time. Kyrgios has reached two Grand Slam quarter-finals – 2015 Australian Open and 2014 Wimbledon.

The 6'4” right-hander looks in a second-week kind of mood this fortnight. Despite his third-set hiccup, he has wasted minimal energy in his first two matches and has been able to compartmentalise his feelings about those affected by the Australian bushfires. Kyrgios' hometown of Canberra, the Australian capital, has been among the most-affected cities.

Kyrgios also expressed regret about his behaviour and consistent chatter towards his team in the third set.

“I apologised as soon as I went back into the locker room. They don't deserve that. They do a lot of things for me on and off the court. No, it's not acceptable from me. Nothing to do with them,” Kyrgios said. “In my next match, I don't want to do that.”

Kyrgios broke in the opening games of the first two sets and raced through his service games. He faced his first break point at 3-2, 30/40 in the third set but erased it. His next service game, however, Simon broke as Kyrgios began chatting more to himself and his box.

But in the fourth set, the Melbourne Arena crowd rallied behind Kyrgios, and as they waited to erupt, the Aussie, on a second serve, delivered his 28th ace on match point.

“It's epic. You guys are awesome. That's why I usually request playing on here as long as I can. It's such a home feel. You guys really get behind me. I love it,” Kyrgios said. 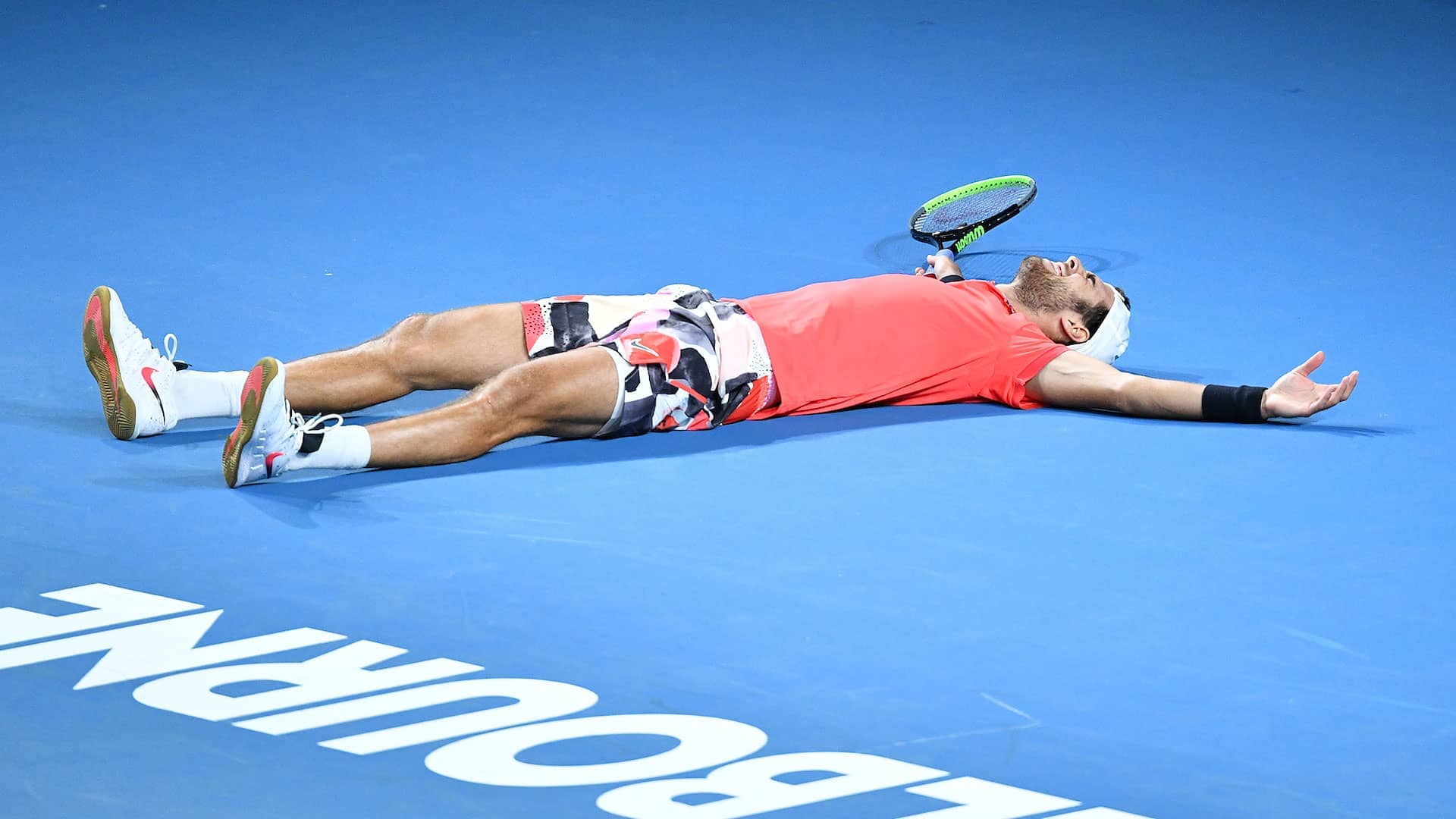 Khachanov, who hit 62 winners past Ymer, leads Kyrgios in their ATP Head2Head series 1-0, a three-set win last year at the Western & Southern Open in Cincinnati.

"I know how good he can play, especially here at  home in Australia," Khachanov said. "He has an unbelievable serve, variety. You don't see, even with the toss, where he's going."