A Trip Through The New Life of Nicolas Massu

Nicolas Massu is in no doubt; Dominic Thiem, whom he has been coaching for almost a year, is ready for the challenge of facing Rafael Nadal at the Australian Open.

The meeting takes place on Wednesday night at Rod Laver Arena as both men attempt to book their place in the semi-finals of the year’s first Grand Slam.

During the build-up, Massu sat down with ATPTour.com to discuss his time in the World No. 5’s box.

How was the preseason?
He had a good pre-season. Twenty one days in Miami and almost two weeks on the Gold Coast. In Miami, we worked hard on fitness. It’s a very good city for the pre-season because of the weather at that time of year, and there were a lot of players too. Then, on the Gold Coast, we put more emphasis on tennis.

The two players we chose for the pre-season were very good. We arrived in Australia on 20 December, we’ve been here for five or six weeks. Dominic wanted to do it like that this season and it’s been good so far.

As a player, you always try to be motivated. Obviously, he has the capacity to work very hard. He always wants to improve and is always prepared to do so. Those of us who surround him, his team and family, try to help him. The important thing is that Dominic is keen and he listens, which is key.

From the outside it seems that you two get on very well.
We come from different cultures and have different nationalities, but we understand each other very well. When the results are positive everything is easier, but the most important thing is believing in the work you’re doing.

I’m here to help him, and I’m really excited about doing it too. I liked pressure as a player and now I like the adrenaline of being a coach, that’s why I’ve started this new phase [of my career]. These are sensations you can only get from sport. I had both sides, as a player and a coach, and I enjoy them equally.

Why do you two click?
We’re both of similar ages. I’ve played many of the players that are still on Tour today. I have an up-to-date vision of tennis and I try to transmit my experience to him. You do have to know the player you’re coaching. I had one style of tennis and Dominic has another, but at the end of the day we’re both motivated to keep doing great things, he as a player and I as a coach.

We share a lot of time together and not just on the court. We met at the Buenos Aires tournament and from there we’ve practically been together all the time. Luckily, we’ve had a very good relationship in terms of respect and we also see tennis in a similar way.

Carlos Moyà said the other day that “when it comes to talking to a professional player, it’s very important to find the right moment.”
As I was a player, and I was on Tour for so many years, I learned a lot about how to manage those spaces. With Thiem, I try to manage it like this: sometimes I’m more on top of him, sometimes I have more distance. The same in matches, being more communicative and euphoric or quieter. You get that from all the years on Tour. It also depends on the player’s personality.

In any case, he is the important person and it’s something vital you have to understand. When you’re a player, everything revolves around you. Now, when you finish that phase [of your career], and for example you become a coach, you have to accept that role. I’ve learnt that the main person is the player.

So you agree with the importance of communication.
I’ve been with him for almost one year and now we know each other much better. You need that period of getting to know one another in order to understand things a little. The results help, of course. Winning Indian Wells when we’d been together for three weeks is a way of confirming that we’re doing the right things, but you don’t always have positive results.

You have to have the clarity of mind to know that there are triumphs, but also defeats. A tennis player’s career is very long. Now I know Thiem better, I have a better idea of when I can talk to him. The most important thing is that a person is open to dialogue, very respectful and has a lot of humility. I’m happy about how great a player he is, but above all about the way he is as a person.

Is it time to stop pigeon-holing him as a clay-court player?
When I started playing, I also did it on clay because in Chile we don’t have hard or indoor courts. I grew up on clay and was very consistent on the surface throughout my career, but my biggest results were on fast courts.

Before becoming his coach, I also saw Thiem and I loved how he played. I was convinced that he could play just as well on any surface because time gives you more experience and you understand tennis better. The little details make a big difference. And one thing is very clear; getting a good result helps you believe that it’s possible. 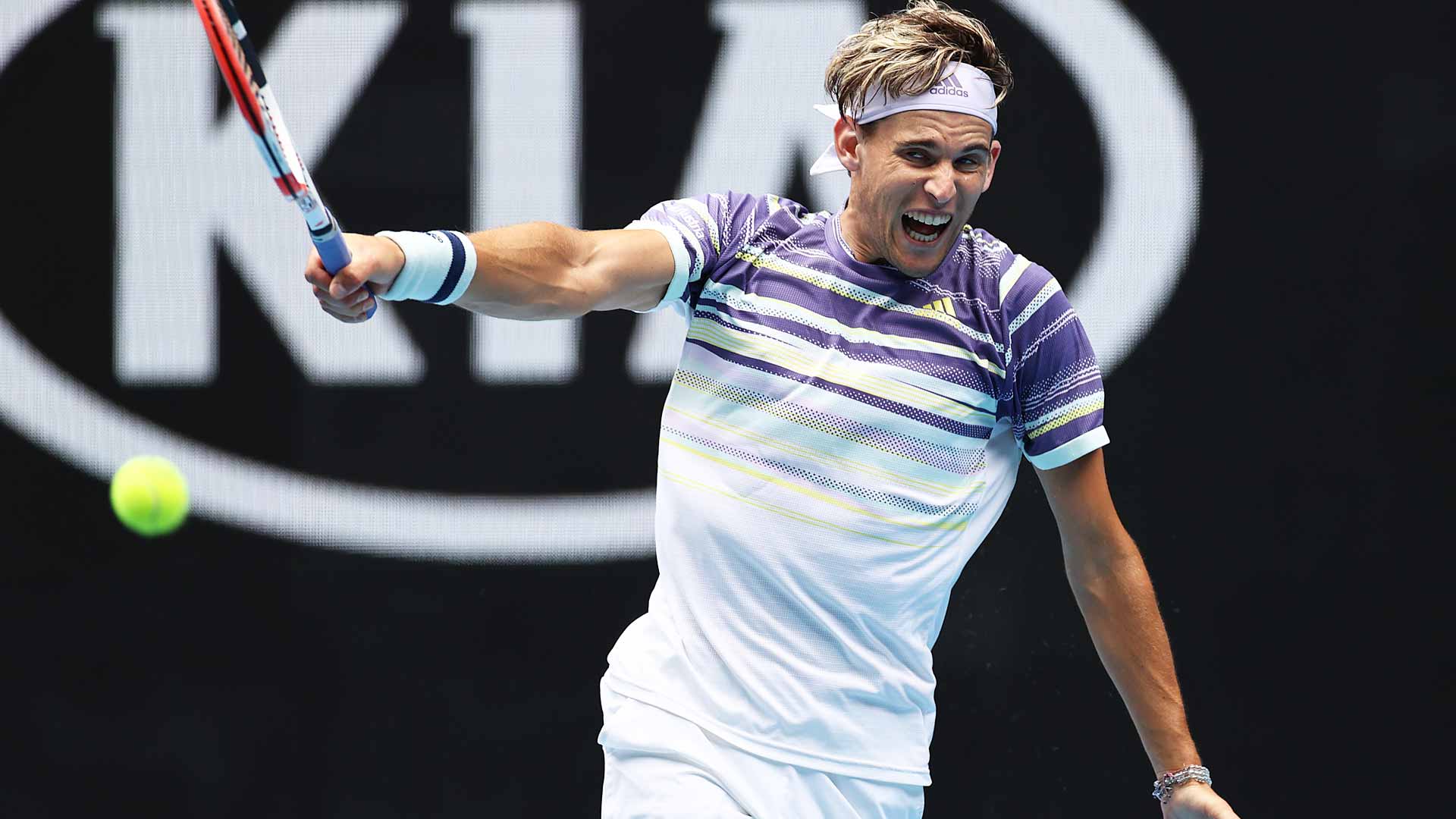 But his big results have been on clay.
His big results have been on clay, yes, but if we look back we can see that he lost to Nadal in the quarter-finals of the US Open in a great match, he won a title on grass, he’s won big matches on hard courts... I think winning Indian Wells was very important to him because it was his first ATP Masters 1000 and that helped him gain confidence to win other titles on fast courts. He nearly won the Nitto ATP Finals, now he’s in the quarter-finals of the Australian Open.

And playing very well.
Credit to him; he’s spectacularly talented, he has great shots, unique power and he’s extraordinarily intense in his work. He’s a tennis player with great desire and at a good age. He just turned 26. He’s still very young, but at the same time he’s been on Tour for several years and he has that experience. He has a very important future ahead of him and, of course, he has the chance to keep doing things, but the most important thing is that desire.

So, is he ready to win a Grand Slam?
I think it could happen at any time, now or within a few years. There are other players that are in a similar situation, but I know that Dominic works to make the most of that chance if the time comes, as it did with me at the Olympic Games. I always wanted to win something important; a Grand Slam, the Davis Cup, the gold medal, to be World No. 1...

I got some things and others I didn’t, but I always told myself that if the opportunity came up, I had to be ready to make the most of it, not wait for it to happen by chance. And Dominic is in that process; he works with the expectation of that moment coming so that he can grab it with both hands.

Rafael Nadal awaits him in the quarter-finals. Two years ago, in the same round of the US Open, the winner was decided in a fifth-set tie-break.
I analyse everything. I see a lot of videos and I draw conclusions from the training sessions. Everyone knows each other on Tour, apart from when a new player comes along and you have to get everything out of your game to give you that advantage. The US Open match is important, but it was nearly two years ago and things have happened.

Last season, they met twice and the spoils were shared in Barcelona and at Roland Garros. It’s going to be a significant challenge. When you’re in the quarter-finals of a Grand Slam it means you’re in the important rounds and that anything can happen. It’ll be a great match for the fans and also for them. They get on well, they have a lot of respect for one another and normally they have incredible matches.

Are they the two most intense players on the ATP Tour?
That’s what everyone says. Those two are among the three or four most intense players, that’s for sure. Someone else may have a similar intensity, but different at the same time because their game is a little freer.

If we’re talking about the intensity with which the ball comes back... The other day they trained at Rod Laver Arena and both of them were producing a spectacular ball speed, the way the ball travelled from one side to the other. That’s why when they meet they tend to produce great matches, because they’re very solid.

What do you like most about Nadal?
I’ve always said it, Rafa is a role model for all the kids. Anyone who sees how he dedicates himself to the sport, the passion he puts in, his mentality... The new generations understand that tennis is not just talent, it’s also hard work. I love how great he is on court, but above all off of it.

He’s a sportsman with a spectacular legacy. And he has one of the best heads in the history of world sport, fighting from the first point until the last and giving it everything he has. We know that we’ll have to throw everything into it, Dominic is clear on that. He is also a fighter, he always wants more, to keep pushing forward... that’s why it will be a great match.