The year-end No. 1 ATP Ranking could be sealed after Saturday’s Rolex Paris Masters semi-finals. Do the stakes get much higher than that?

Second seed Rafael Nadal continues his pursuit of his first title at this ATP Masters 1000 tournament, and his 36th trophy at this level. But the Spaniard will have to get by a highly motivated 20-year-old in Denis Shapovalov, who is trying to make his first final at this level. Nadal has not dropped a set this week, but Shapovalov is fresh off a stunning straight-sets victory against Gael Monfils, which eliminated the Frenchman from Nitto ATP Finals contention.

Nadal is 4-0 on the year against lefties, and 100-15 in his tour-level career. But one of those defeats came at Shapovalov’s hands two years ago in Montreal, in the midst of the Canadian’s magical run to the semi-finals when he was only 18. Nadal then evened their FedEx ATP Head2Head series at 1-1 last year in Rome.

“He doesn't need any advice. That's the real thing. He's good in all aspects. The only thing that he needs is a little bit more time. Maybe not that much,” Nadal said after their Rome clash, cracking a smile. “He's good. He's very good.”

Nadal is just two victories away from clinching year-end No. 1. And if Novak Djokovic loses Saturday’s first semi-final against Grigor Dimitrov, Nadal will only need to defeat Shapovalov to accomplish the feat. But while he will be the underdog, Shapovalov carries plenty of momentum into the match. Over the past three months, the Canadian has won his first ATP Tour title in Stockholm, made semi-finals in Winston-Salem and Chengdu, and now he has a shot to earn his third Top 10 win of the year, just two days after earning his second against Alexander Zverev.

“I feel like with that title in Stockholm, it kind of gave me a sense of calmness, relief. And I've just been able to enjoy the last couple weeks of the season,” Shapovalov said. “Because of that, I feel like I've been able to play really well.” 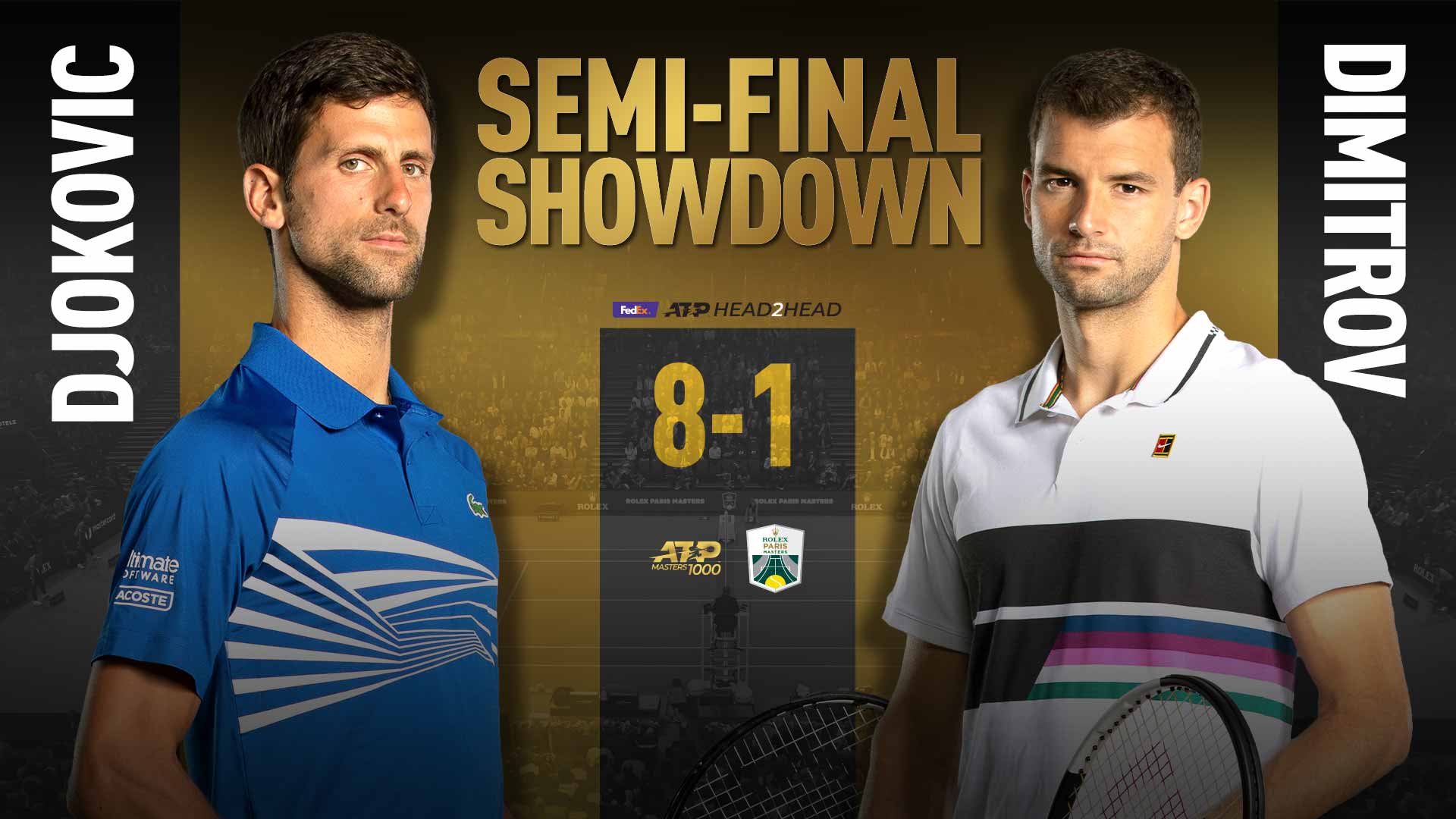 Djokovic and Dimitrov will kickstart the day’s singles action when they meet for the 10th time in their FedEx ATP Head2Head series. Although the World No. 1 — who holds the record with four titles at this tournament — has beaten Dimitrov on eight of nine occasions, Djokovic knows the man across the net is playing tennis reminiscent of when he won the 2017 Nitto ATP Finals.

“He’s been playing some terrific tennis this week. I saw him play the past couple of days. He seems to really like the conditions here,” Djokovic said. “I don't play too bad myself, so it's going to be for sure a good one.”

The pair’s only previous clash on indoor hard came here in Paris three years ago, when Djokovic triumphed 4-6, 6-2, 6-3. Dimitrov did not lose a set against David Goffin in the second round or Dominic Thiem in the third round, so Djokovic knows his Bulgarian opponent is particularly dangerous in these conditions.

“The quicker it is, I think the better chance I think he's got. On grass court particularly, he's playing very well. But he's also played well on the other surfaces. It's just that I think his game is more suitable for the quicker surfaces,” Djokovic said. “Judging by the past couple of months, past couple matches I've seen, he's been feeling the backhand really well. So, obviously, most of the players are trying to attack that vulnerable side of his game.

“But he mixes it up really well with the slice. He blocks a lot of returns and gets back into play and he moves extremely well. I think he's one of the fittest guys on the Tour. So that helps him, always being in the right position.”

Dimitrov has turned his season around in a major way. At the US Open, he was World No. 78, his lowest mark since 28 May 2012. But he made the semi-finals in Flushing Meadows, and is projected to return to the Top 20 regardless of whether he defeats Djokovic.

Did You Know?
Nadal will return to No. 1 on Monday regardless of the results for the rest of the tournament.

Doubles Semi-finals
Ivan Dodig and Filip Polasek clinched the final spot at the Nitto ATP Finals on Friday. And now, they will try to reach the Paris final. The eighth seeds will face unseeded Russians Karen Khachanov and Andrey Rublev.