Relive the best moments between Roger Federer and Novak Djokovic in their Nitto ATP Finals clashes at The O2 in London. Watch live tennis streams at http://www.tennistv.com. Photo: ATP Tour

Two legends. One match. Win and you're into the semi-finals.

Does it get more tantalising than the battle to come between Novak Djokovic and Roger Federer on Thursday at the Nitto ATP Finals?

Two of tennis' all-time greats will compete against each other for the 49th time in their epic FedEx ATP Head2Head rivalry, with the winner advancing from Group Bjorn Borg and into the last four at the season finale. With Rafael Nadal's win on Wednesday, Djokovic must now win his record-tying sixth Nitto ATP Finals title to give himself a chance of seizing the year-end No. 1 ATP Ranking for the sixth time in his career. Six-time champion Federer has made the semi-finals in 15 of his previous 16 appearances at this tournament.

Djokovic will have to wipe his mind clean after suffering a gut-wrenching three-set defeat on Tuesday against big-hitting Dominic Thiem. The Serbian came from a break down on two occasions in the deciding set. Then he took a 4/1 lead in the ensuing tie-break before succumbing to the Austrian star.

"I'm still in the tournament," Djokovic said. "We go head to head with Roger. Winner goes to semis. Loser doesn't qualify. As simple as that."

Most Wins In Tournament History

Djokovic takes a 26-22 lead in their rivalry into this battle, including five consecutive wins and victories in nine of their past 11 matches. The 32-year-old has won three of their five clashes at the Nitto ATP Finals, with their most recent contest at this event coming in the 2015 championship match, won by Djokovic.

"I'm excited playing against him," Federer said. "I think I need to focus on my game, what I do best. And regardless of what I need to do, I just hope I play well."

Federer also lost to Thiem this week, but the Swiss star recovered well against first-time qualifier Matteo Berrettini on Tuesday to improve his record at the Nitto ATP Finals to 58-16. The last and only time he lost two round-robin matches in this tournament came in 2008.

Both competitors played tremendously well in their most recent meeting in the Wimbledon final. Federer held two championship points in that battle before Djokovic rallied to win in a fifth-set tie-break, which was held at 12-12. Federer says that he won't let the cobwebs of that match remain as they stand across the net from one another once again.

"I think it's all flushed away from my side. A lot of water has gone under the bridge since then," Federer said. "I wasn't hoping [for] him not to be in my section or in my draw. I didn't hope I was never going to play him again. Actually, it's good for me to play him again, and maybe that all helps to get a chance to get him back or whatever it is. But at the end of the day, I'm here for the [Nitto ATP] Finals and not because of the Wimbledon finals." 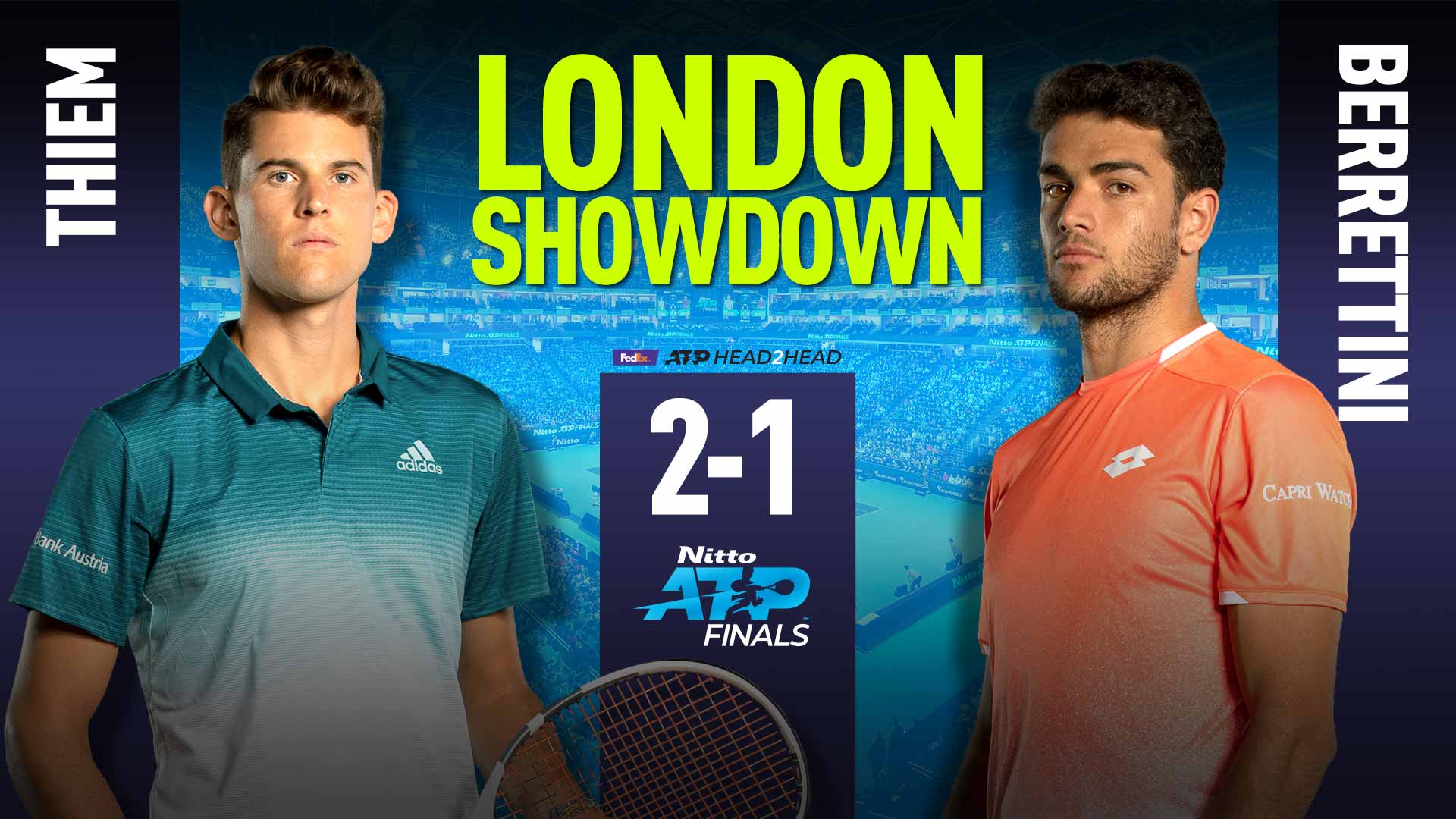 In Thursday’s first singles match, Dominic Thiem looks to enter the semi-finals with a perfect record at The O2 this year. After defeating Federer and Djokovic in back-to-back matches, he will pursue his third victory of the week against Berrettini.

In his first three Nitto ATP Finals appearances, Thiem won one match apiece and never made it through the group stage. The Austrian can double the win total he arrived with by defeating Berrettini, who is searching for his first triumph at the season finale.

“I'm super happy and proud that I reached the semi-finals for the first time. It was a big goal, but of course it's not enough now. I'll try to play a good match against Matteo on Thursday,” Thiem said. “It's a little bit more comfortable now that I don't have a lot of pressure in this match, but of course I want to continue the great shape and then [turn my] full focus on the semi-finals.”

Berrettini is unable to qualify for the last four in London regardless of Thursday’s results. But the Italian knows that considering he began the season outside the Top 50 in the ATP Rankings, this is still a tremendous opportunity to compete against one of the best players in the world, especially having already played Djokovic and Federer.

“I'm playing against the best guys on the planet and maybe the best guys ever. So I'm proud of what I'm doing. I'm proud how I'm facing these kinds of situations. I think that I played a good match also against Novak even if the score was not that good. But for sure, I'm learning,” Berrettini said. “These kinds of losses, they will help me in the future to get better. When I stepped in the locker and my coaches were there, I said, ‘Guys, I want to be better. I want to be able to beat those guys.’”

Berrettini will have a chance to even the pair's FedEx ATP Head2Head series at 2-2. They have split two meetings in the past two months, with Berrettini winning in straight sets at the Rolex Shanghai Masters before Thiem thrilled his home crowd with a comeback three-set victory at the Erste Bank Open in Vienna.

"It was full from the first point on. Such a loud atmosphere as well. It was perfect to play in and the match was on a very high level from the first to the last point," Thiem said in Vienna. "With all the support and home advantage, I was able to pull through."

Did You Know?
Djokovic and Federer's 48 matches are second behind only Djokovic and Nadal's record 54-match FedEx ATP Head2Head series.