Persistent rain made for an unprecedented Santo Domingo Open.

Josh Meiseles
This article contains:
Rain from Hurricane Michael and oppressive humidity created a test of physical and mental fortitude at the Santo Domingo Open

A glance at the drawsheet for the 2018 Santo Domingo Open will show many things. It reveals that Santiago Giraldo stunned top seed Pablo Cuevas in the first round, earning his first win over the Uruguayan in 12 years. It shows that Dominican wild card Jose Hernandez-Fernandez enjoyed a magical run to the quarter-finals on home soil.

It also unveils the dominant campaigns of Christian Garin and Federico Delbonis en route to a championship clash, dropping one combined set. Dig a little deeper and you'll discover that the 22-year-old Garin saved two match points to set a final rematch with Delbonis, having prevailed in Campinas, Brazil, one week ago.

But what the drawsheet does not show is what transpired off the court at the $125,000 ATP Challenger Tour event. Persisent, torrential rain from the outer bands of Hurricane Michael led to scheduling chaos. Oppressive heat and humidity forced even the most well-conditioned of athletes to fall to their knees and declare 'no más'.

What may appear to be a normal tournament was anything but. Professional tennis always requires unwavering mental focus and physical durability, but this was a test of endurance and fortitude like players had never seen in their entire careers. To say that Garin and Delbonis deserved to stand on the final stage and battle for the trophy is an understatement.

"You have to be fresh mentally, because the weather is heavy here and nothing has come easy," Delbonis told ATPWorldTour.com. "The courts and the balls have been a little slower than usual. With all the matches, you have to treat them equally. You have to be fresh in your head and in the tough moments stay clear with your thoughts. This was one of the keys this week."

The week of chaos began on Tuesday, when moisture from Hurricane Michael whipped across the Caribbean islands, drenching the Dominican Republic. A total of 11 first-round singles matches were on the schedule, but after less than an hour of play, the skies closed. Steady drizzle transformed into heavy rain with claps of thunder and lightning strikes.

Dawn turned to dusk in the blink of an eye and the possibility of play being canceled for the day was suddenly very real. But, with a Saturday final looming and more rain in the forecast for Wednesday, losing a day was not an option. After a seven-hour delay, the rain finally halted at 6pm and players were back on court by 7 o'clock. Play was supposed to be winding down for the day, but it was just getting started.

It was a surreal experience for all involved, as the hours ticked by. Players shuttled to the site from their hotels as midnight crept closer, with warmups and pre-match meals going on at 11pm. Santo Domingo was in darkness, with the Club La Bocha a bright exception. Floodlights illuminated the three match courts, with four matches scheduled on each.

You May Also Like: Challenger Stars Abound In Santo Domingo

Midnight was long gone when the last group of players stepped on the court. At 2am, there were three matches simultaneously being contested. And incredibly, the draining day did not discourage fans from flooding into the club. Estadio 1 provided the moment of the day at 3am, as local hero Jose Hernandez-Fernandez survived a three-set battle with Thiago Monteiro. The 28-year-old was exhausted, but the crowd was packed with the Dominican faithful, who provided the energy to push their native son across the finish line. The biggest late-night party in the city was happening at a tennis club and everyone was invited. Fans were dancing in the stands and screaming with joy.

But for the bleary-eyed players, it was an exhausting experience and one that tested their mettle and fortitude to the extreme. At 3:24am, Gastao Elias defeated Marcelo Arevalo to conclude the day. It is unknown if it is a Challenger record, but it improbably tied the ATP World Tour mark for latest finish ever. Benjamin Becker and Jiri Novak also concluded their match in Tokyo 2006 at the exact same time. To the minute.

"The truth is that on Tuesday, it was an exhausting day," Delbonis added. "To spend more than two hours in the club and not know if we're going to play. And then if we did play, who knew what the conditions would be after all the rain. And with possible court changes and time changes, playing so late at night, it was tough on all the players."

And the drama was not finished. Play was completely washed out on Wednesday as the rain refused to dissipate. The first round was in the books, but the loss of a full day wreaked havoc on the schedule for the remainder of the week. In addition, only two doubles matches had been completed to that point. 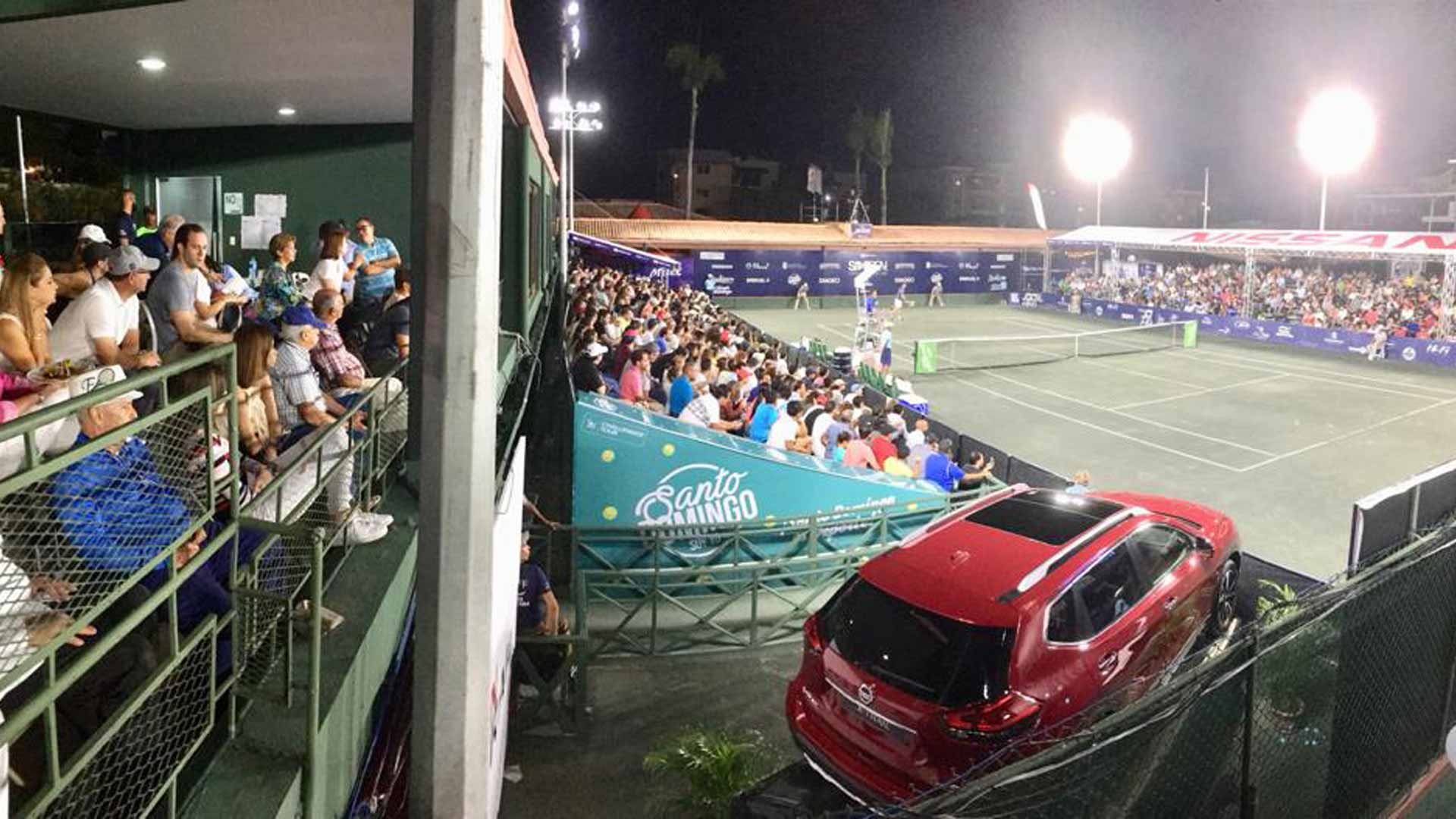 As the sun rose on Thursday, with scattered clouds in the sky, it was a welcome sight for players, umpires, tournament officials and the legion of fans that flocked to La Bocha for the biggest professional tournament in all of the Caribbean and Central America. Baseball rules in the Dominican Republic, but tennis is steadily growing in popularity and the Santo Domingo Open is the crown jewel on the calendar. Having world-class players in such an intimate setting, giving fans the opportunity to witness high-level tennis, is massive for the game's development.

But holding an outdoor tournament in a tropical location during hurricane season has its inherent problems. On Thursday, the full impact was felt as they scrambled to catch up under clear skies. A grand total of 21 matches - 12 singles and nine doubles - were contested over 14 hours. Play got underway at 10am and concluded at midnight, with second round and quarter-final singles completed first, followed by first round and quarter-final doubles.

Top seeds Leander Paes and Miguel Angel Reyes-Varela finished their doubles opener at 10pm and were right back on court 15 minutes later to book a spot in the semis. The Indo-Mex duo put a bow on Manic Thursday just before the stroke of midnight and were given a roaring ovation by the Dominican faithful that remained throughout the day. Chants of 'Pa-es! Pa-es!' and 'Rey-es Var-ela!' echoed across the grounds.

21 matches
14 hours
1 long day@micky_rv & @Leander bring Thursday in Santo Domingo to a close in front of the 🇩🇴 faithful pic.twitter.com/QJpIctPQcC

After a 3:24am finish on Tuesday, complete rainout on Wednesday and 21-match slate on Thursday, it was a true test of survival. The oppressive humidity left behind by the storms made the tournament a battle of nerves and physical and mental conditioning. There are occasions when tennis transcends the forehands and backhands on the court and becomes a test of managing the unexpected external factors. This was undoubtedly one of those times.

"It's important to stay calm and relaxed. We've had heat and humidity, a lot of rain and long days," Delbonis continued. "And then on Thursday, I had two tough matches, but even with the tough conditions, I was able to finish quickly. That was important. And I had time to rest and recover before my semi-final. Every match is different, so I had to focus all my energy."

On Saturday, Delbonis will look to avenge his defeat from a week ago in the Campinas final. But Garin, who enters on a nine-match win streak, is on the precipice of a Top 100 breakthrough and will be keen to lift his second straight trophy.

"It's important to take the initiative," Delbonis exclaimed. "In the other match, I couldn't do that. He was playing on another level. But this is different now. I have a new opportunity."

Regardless of the outcome, both players will hold their heads high after the week that was in Santo Domingo. It is one that neither will ever forget.