Challenger Tennis With A View

Josh Meiseles
This article contains:
Explore some of the more scenic locales on the ATP Challenger Tour

If you listen closely, you can hear the crunch of pristinely trimmed blades as players take to the grass courts of the Aegon Surbiton Trophy in suburban London this week. The grass-court season is here, and the fresh smell of carefully groomed lawns is in the air on the ATP Challenger Tour, with three weeks of tennis set to commence in England.

The tournaments in Surbiton, Nottingham and Ilkley provide some of the more quaint and picturesque settings on the circuit, but which Challengers are held in the most scenic, breathtaking locales? We look at the 10 best, presented in alphabetical order by city...

Kunming Challenger (Anning, China)
One of two events in the Asia-Pacific region that feature on our list (see Noumea below), the tournament in Anning is located in the Yunnan region in southern China. With beautiful pastoral views of the surrounding countryside, the Hot Springs Tennis Center is a popular destination for players on the ATP Challenger Tour.

The nearby rolling hills and hot springs embed the venue in a serene setting. Former World No. 8 Janko Tipsarevic claimed the title in the tournament’s sixth edition this year. The $150,000 event is part of a two-week Chinese clay-court swing, which also includes the tournament in Qingdao. 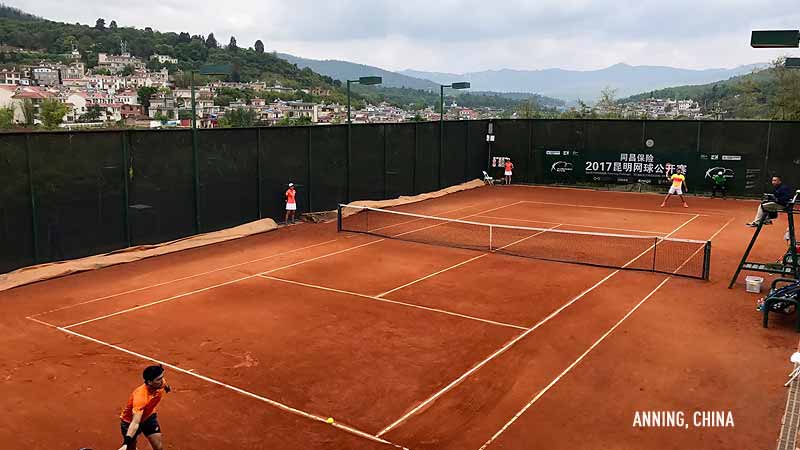 Internazionali di Tennis di Cortina (Cortina, Italy)
The Alps in central Europe boast some of the most stunning mountain views in the world. Nestled in the Dolomite region in northern Italy is the beautiful ski resort town of Cortina, which hosts a €64,000 event on the ATP Challenger Tour in July. Few photos capture the true beauty of the Tennis Country Club Cortina, which basks in the shadow of the snowcapped peaks surrounding the courts.

“Cortina is a very beautiful place,” said #NextGenATP star Karen Khachanov. “I like to be in the mountains. I like to ski too and it brings back memories of being with my family in the mountains. It’s a different atmosphere being around nature and that’s why this tournament is so nice.”

Neckarcup (Heilbronn, Germany)
Some of the top Challenger destinations reside in Germany, with multiple ATP Challenger Tournament of the Year winner Braunschweig boasting packed crowds and world-class entertainment, and the indoor hard-court event in Eckental celebrating its 20th edition in 2016.

Tucked in the southwest corner of the country, less than an hour north of Stuttgart, is the sleepy city of Heilbronn. With the river Neckar curling around the downtown district and a vast expanse of vineyards dotting the surrounding region, Heilbronn’s tranquility provides players with a relaxed setting for a tournament.

One of the few remaining clubs on the ATP Challenger Tour to be founded in the 1800s, the TC Heilbronn Trappensee E.V. 1892 has hosted the Neckarcup for the past four years. World No. 10 Alexander Zverev broke into the Top 100 for the first time after lifting the trophy in 2015.

“That was my second Challenger title and I never played another one after that,” said Zverev. “It got me into the Top 100 for the first time, so it was a big step for me. The event is very well run and the organisation really tries to listen to players and improve every year. That’s why players really enjoy coming there. There are two stadium courts as well, which is not common for a Challenger event. And many spectators come out to watch.” 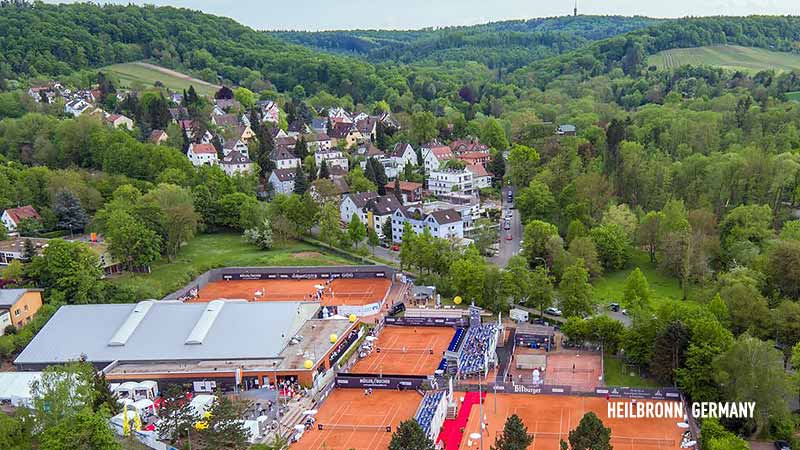 Aegon Ilkley Trophy (Ilkley, U.K.)
The ATP Challenger Tour grass-court season concludes with the Aegon Ilkley Trophy at the 136-year-old Ilkley Lawn Tennis & Squash Club. Arguably one of the most picturesque venues on the Challenger circuit, the tournament is nestled adjacent to the idyllic Ilkley Moor, Cow & Calf Rocks and River Wharfe. With the rocks perched atop the moor, the expanse is 402 m (1,319 ft) above sea level and overlooks the town and surrounding countryside.

"It's pretty amazing in Ilkley," said 2015 champion Denis Kudla. "There are lots of fans here supporting the tournament and the players. It has the environment that players love." 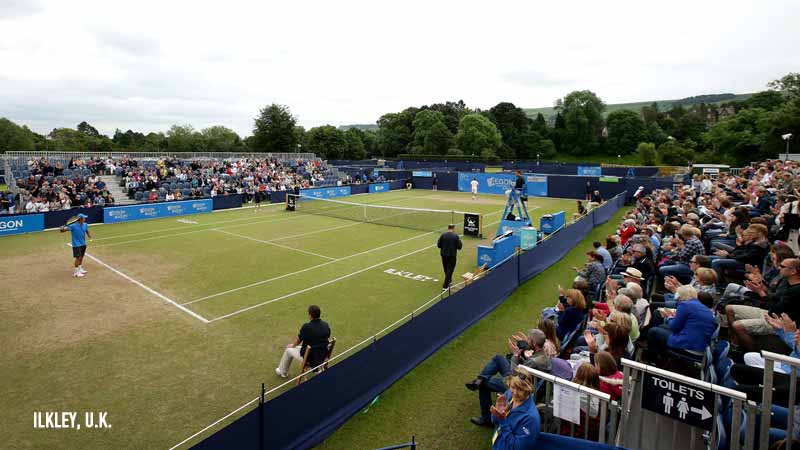 Tennis Championships of Maui (Maui, Hawaii, U.S.A.)
Located steps from the Pacific Ocean on the Hawaiian island of Maui, the Royal Lahaina Resort is home to one of the player and fan favourite events on the ATP Challenger Tour. Mammoth waves crash on the adjacent shoreline as players hit the court for the $75,000 hard-court tournament. Held during the second week of the Australian Open in late January, its spot on the calendar is just as ideal as its breathtaking location.

“Maui is definitely a beautiful place,” said 2015 champion Jared Donaldson. “The scenery is great and the beach is awesome. You get to see the whales off the shore and I think it’s their mating time of year. That was my first Challenger title, so I got a lot of confidence from that event and have great memories.”

“I’ll be honest, it’s tough to focus on the tournament when you have the beach right there,” added fellow American Taylor Fritz. “And the resort is great. There’s nothing stopping you from going to the beach and relaxing all day. It’s just an amazing setting to have a tennis tournament.” 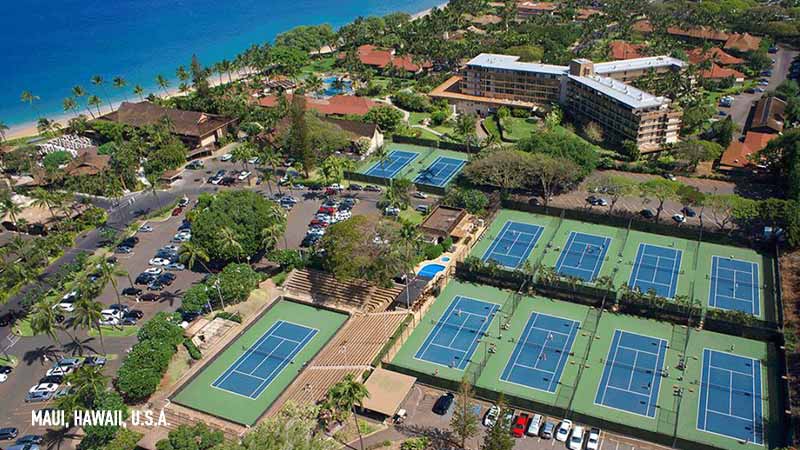 Monterrey Open (Monterrey, Mexico)
The Monterrey Open – a $100,000 event on the ATP Challenger Tour – made a strong introduction to the circuit with its award-winning inaugural edition in 2015. The co-Challenger of the Year, it is held at the base of a vast mountain range extending from the United States to Central America. With 3,700 m peaks towering over the Deportivo Alpino Chipinque, it provides one of the more picturesque Challenger locales and contributes to the tournament’s intimate atmosphere.

“The venue is beautiful. It’s a great Challenger that I would recommend to anyone coming out to Monterrey,” said former World No. 8 Mark Philippoussis, who competed at the concurrent ATP Champions Tour event. “The players are well taken care of and the people here are incredibly hospitable. They make you feel like you’re at home.” 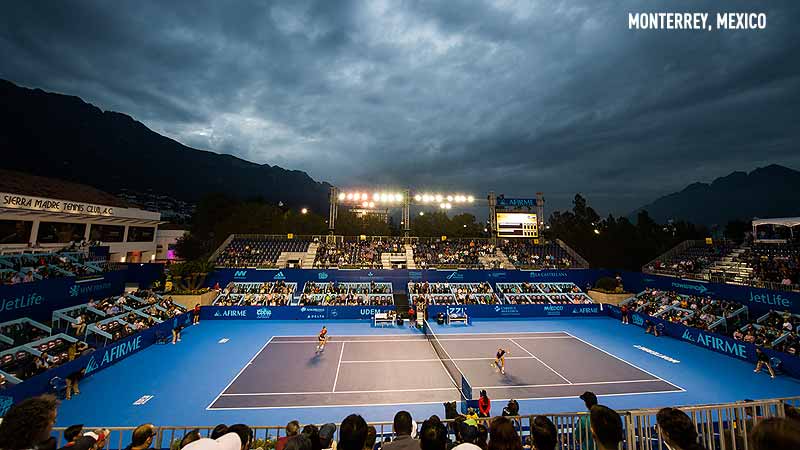 Challenger BNP Paribas (Noumea, New Caledonia)
Travel to Maui and Noumea and you’ll be plunged into arguably two of the most stunning beach settings to host a sporting event of any kind. The capital of an island collectivity of France called New Caledonia, located off the east coast of Australia, Noumea is home to a hard-court event during the first week of the year. A short saunter from the Coral Sea in the South Pacific, the Ligue de Tennis du Ouen-Toro boasts breathtaking, unobstructed ocean views. Frenchman Gilles Simon is its most accomplished champion, going back-to-back in 2005-06 en route to ascending to No. 6 in the Emirates ATP Rankings. 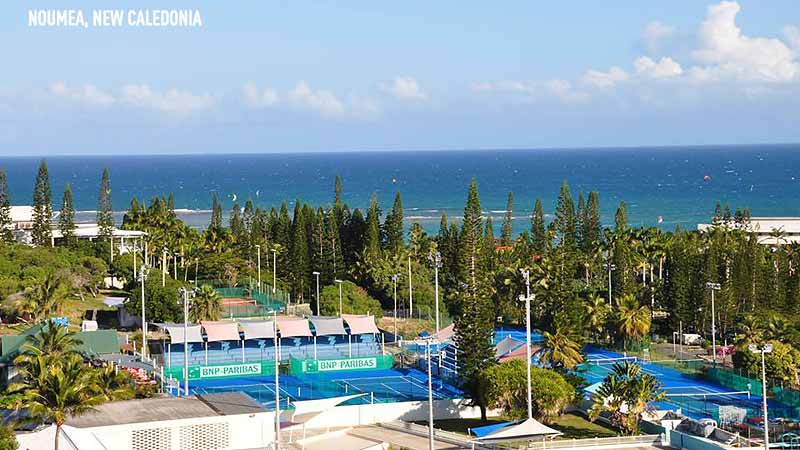 Tilia Slovenia Open (Portoroz, Slovenia)
The Croatia Open Umag is known as one of the hidden gems on the ATP World Tour, with its tennis complex located directly on the Adriatic Sea and the beach just steps away. Hop in your car and drive 30 minutes north of the city, crossing the Croatia-Slovenia border, and you will arrive in Portoroz, home of the Tilia Slovenia Open. With sea views that rival its ATP World Tour neighbor, the Sports-Recreation Center Marina Portoroz is also nestled along the Adriatic. It is home to 13 clay courts as well as two indoor and five outdoor hard courts, including a multipurpose stadium that seats 1,600 fans. #NextGenATP Russian Daniil Medvedev reached his first Challenger final there last year.

Movistar Open by Cachantun (Santiago, Chile)
Held in late October at the Club de Polo y Equitacion San Cristobal, the clay-court event in Santiago, Chile, is one of the premier Challengers on South American soil. Led by Catalina Fillol, daughter of former World No. 14 Jaime Fillol Sr., the event’s hospitality is just as impressive as the stunning peaks that blanket the region.

The Chilean capital is located on the southern edge of the Andes Mountains and provides players and fans with a jaw-dropping setting for a tournament. Founded in 1947, the historic club is now home to 20 tennis courts, including 19 under the lights, on its sprawling 60-hectare (148-acre) property.

"The venue is pretty amazing,” said Norwegian teen Casper Ruud, who reached the quarter-finals last year. “The weather was a little cold but it's a beautiful club, a beautiful city and a beautiful country. The centre court is awesome and surrounded by the Andes Mountains." 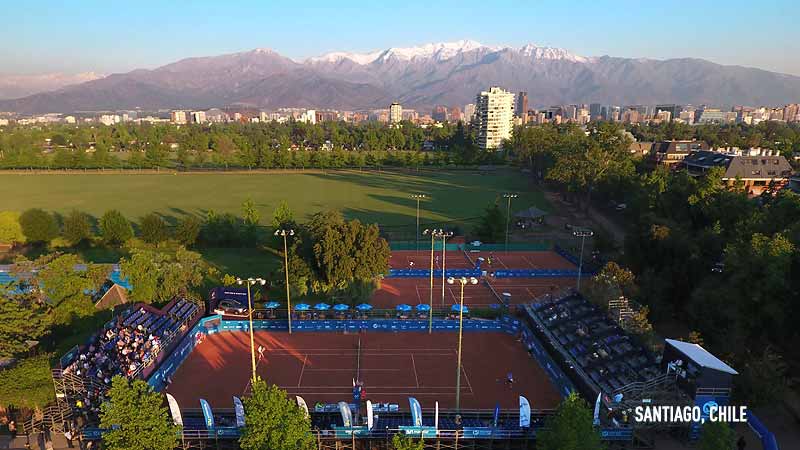 Wells Fargo Tiburon Challenger (Tiburon, California, U.S.A.)
The sprawling wine country of Northern California welcomes the ATP Challenger Tour in late September to early October, kicked off by the $100,000 event in Tiburon. Located minutes from the Golden Gate Bridge and downtown San Francisco, the Tiburon Peninsula Club is steps from a popular marina, which shuttles locals and tourists throughout the San Francisco Bay. During last year’s tournament, players enjoyed a cruise on a club member’s private boat. 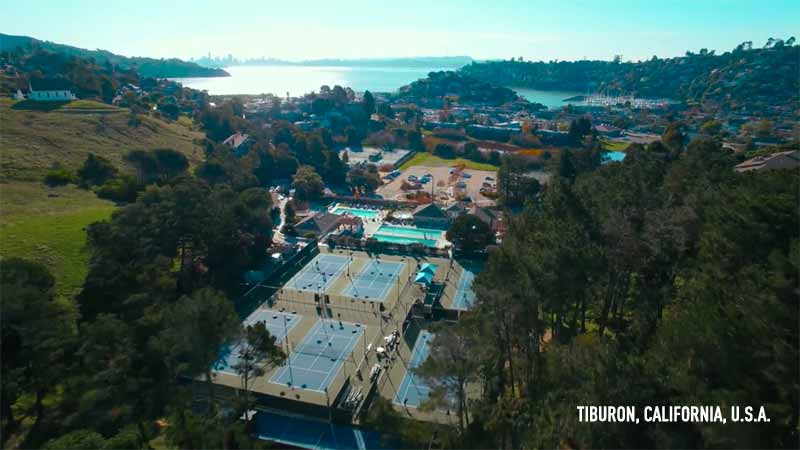